Venture fundraising is headed toward another strong quarter, with $11.4 billion raised through mid-September, according to preliminary data from Thomson Reuters.

A similarly strong final three months of the year could push 2018 to an 18-year fundraising record.

The data finds 91 funds have raised capital so far in the third quarter, with more than two weeks to go before the quarter’s end. Capital raised through Sept. 12 already is approaching the $12.1 billion of an also strong second quarter, according to the data. 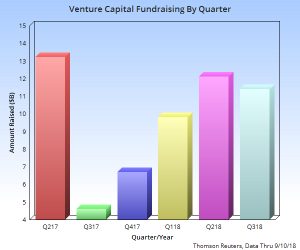 The quarter has been led by Sequoia Capital, which raised $2.5 billion across three China funds, and Lightspeed Venture Partners, which attracted $1.98 billion for three funds, according the Thomson Reuters. The Foundry Group brought in $750 million.

If the fundraising pace continues, the year could just top the $44.2 billion of 2016 to become the largest for fundraising since the height of the dot-com surge in 2000.