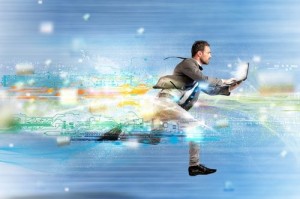 By all measures, deal making in Canada’s venture capital market was on fire in 2015.

Venture funds invested $2.6 billion in Canadian startups last year, the largest amount since 2002, according to data recently released by Thomson Reuters. The dollars flowed to 579 financing rounds, the most in a decade.

Venture funds south of the Canadian border shared in the excitement, as U.S.-based and other foreign investors brought over $1 billion to domestic financings last year, nearly 40 percent of the total.

Frothy market activity was led in IT sectors, which captured $1.6 billion, or 60 percent of total VC invested. Deployments to enterprise software and fintech companies were especially strong.

Other Canadian sectors, including cleantech and life sciences, also made gains in 2015 or matched achievements from the year before.

In the fourth quarter, VCs pulled back on their Canadian investments, possibly in reaction to growing economic uncertainty and volatile public markets.

But some investors think the momentum shown in Canada’s venture market in 2015 is not yet spent.

Jim Orlando, managing director at OMERS Ventures, who has penned a list of predictions for 2016, says that while the nature of deal making may change in the months ahead, activity should generally stay on course.

Orlando predicts deal volume will actually increase this year, something he attributes to the recent high rate of company formations in Canada.

“In the funnel we’re in now, there are more things starting up,” Orlando told PE Hub Canada. “This means there are fewer companies requiring larger, late-stage investments and more companies at the early stage requiring smaller investments.”

Orlando also expects a steady stream of dollars invested in the domestic market in 2016. Factored into this calculation is the lower value of the Canadian dollar.

A weak loonie, which currently hovers above 70 cents USD, is viewed as anathema to Canadian startups that are recruiting talent or expanding south of the border. On the other hand, late-stage companies whose revenue is in U.S. currency may find the situation “beneficial,” Orlando said.

Orlando also believes a weak loonie may attract more American VCs to Canadian financings: “In this scenario, every dollar invested by U.S. venture funds goes a lot farther in Canada.”

Additionally, deal making in 2016 may be assisted by improved Canadian fundraising. Orlando thinks the latter may be driven by more VCs targeting larger-sized funds.

Canadian fundraising was flat last year with $1.2 billion in new commitments, unchanged from 2014, according to Thomson Reuters.

A key to better results this year are funds of funds backed by Ottawa’s Venture Capital Action Plan (VCAP), a program that is trying to leverage greater corporate and institutional participation in the asset class.

At last count, VCAP pools had a collective size of over $1 billion, not all of which has been committed to fund partners.

Fundraising activity in the first months of 2016 suggests a growth trend is perhaps underway. So far, seven funds, including BDC Capital IT Venture Fund II, Information Venture Partners II, iNovia Investment Fund 2015 and Leaders Fund, have accounted for roughly $700 million in fresh capital, over half of the 2015 total.

Orlando is not expecting significant exit activity via public sales in the months ahead. However, he believes prominent VC-backed IPOs last year, above all the Nasdaq debut of e-commerce platform Shopify, have opened doors for other Canadian startups.

“Shopify has shown that Canadian startups can go all the way,” he said.

After Shopify’s IPO, several well-funded Canadian IT companies, such as D2L, Hootsuite, Lightspeed and Vision Critical, signaled an interest in going public. Orlando believes they will eventually get their chance.

“Shopify’s success will be repeated,” he said.

This story first appeared in affiliate magazine Venture Capital Journal, which is published by Buyouts Insider. Subscribers can read the full story and by clicking here. To subscribe to VCJ, click here for the Marketplace.