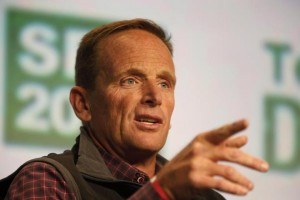 Shortly after moving to Silicon Valley in 2004, the young Facebook founder Mark Zuckerberg pulled a prank on Sequoia Capital by making an investment pitch in his pajamas.

The discussion never got serious, and Sequoia never invested in Facebook. But now, Sequoia is getting the last laugh.

With the sale of its protégé company message service WhatsApp to Zuckerberg’s Facebook for $19 billion, Sequoia found a way to make money from Facebook as well as solidifying its position as a titan of venture capital. And it establishes partner Jim Goetz, who landed the deal, as one of Silicon Valley’s top rainmakers.

“This would make a lot more founders want to work with Jim Goetz,” said Sam Altman, a partner at Y Combinator, a program for start-up companies whose previous startup was backed by Sequoia.

In a business where top firms come and go, Sequoia has proved remarkably tenacious. Its big wins take on particular significance in an era when venture firms must beat back challenges from individual investors known as “angels” and crowdfunding; new technology that makes early-stage investments less crucial than they once were; and critics who say that venture capital investments aren’t worth the trouble.

Facebook announced the acquisition deal on Feb 19, astounding many with the price it paid for the service, which has 450 million users and is growing at 1 million a day.

Sequoia, which invested $60 million and made around $3 billion from WhatsApp, according to a source familiar with the situation, has squeezed a considerable sum out of Facebook, even if it never did invest in the social-media behemoth. Sequoia also backed photo-sharing service Instagram, which Facebook bought in 2012 for $1.01 billion.

By contrast, Accel Partners, the biggest venture investor in Facebook, held $7.64 billion worth of Facebook shares at the time of that company’s 2012 IPO.

Launched in 1972 by Don Valentine, a founder of National Semicondutor, Sequoia was one of the nation’s earliest venture-capital firms. As most others of the earlier generation faded from the scene, Sequoia held its own, going on to fund companies including Apple Inc, Oracle Corp, Paypal, and Google Inc.

Today, it is involved with many of the hottest startups, including accommodation service Airbnb, file-sharing service Dropbox, invitation service Eventbrite, and stereo and bluetooth headset maker Jawbone.

“We were so excited to meet with them,” said David Rusenko, co-founder of web-hosting service Weebly, recalling his early interactions with Sequoia before the firm invested in his company three years ago. “Sequoia is the gold standard, as far as we were concerned.”

Of course, not everyone holds that view. Silicon Valley impresario Sean Parker, for example, blamed Sequoia for contributing to the downfall of his online-address book company, Plaxo, after he was forced out. Others complain the company is too hard-nosed when it comes to negotiating. And it has missed out on some big success stories, such as Twitter.

But among startups, the firm holds a reputation for being ahead of the curve on business. For example, Sequoia nudged its portfolio companies to embrace mobile more forcefully and earlier than other venture firms, Rusenko said.

He and other founders say that the firm, based on Silicon Valley’s legendary Sand Hill Road, is adept at competing with other venture capitalists when a start-up is seeking funds. It also excels at courting companies that aren’t actively seeking funding and persuading them to take it — like WhatsApp.

“The notion of them marching up and down Sand Hill with a Powerpoint deck is comical,” Goetz told Reuters, referring to WhatsApp founders Jan Koum and Brian Acton. He had cultivated them since 2010 before closing Sequoia’s first investment the following year.

In keeping with the firm’s more discreet ethos, he holds a low profile compared with partners at other venture firms, or even Sequoia’s own star partner, Mike Moritz. He rarely speaks at conferences, refrains from blogging, and has sent out just 180 tweets. But people who have worked with him say he speaks with quiet authority.

“He clearly was the most intelligent about our market, and had done better research,” recalled Jive Software co-founder Matt Tucker about the days Goetz was courting him and co-founder Tony Zingale.

After Sequoia first invested in Jive in 2007, Goetz took Tucker along to a board meeting at fellow portfolio company Palo Alto Networks so he could learn how other companies handled those events. Goetz bought good wine to mark company milestones, invited Tucker and Zingale to parties at his home, and showed an interest in their lives outside work – but stayed focused on the business.

“In no way would you confuse Jim as a tender-hearted cuddly bear,” Tucker said.

Staying focused is crucial in the venture-capital industry, which has come under fire for lackluster returns at all but a small group of top firms. As results have disappointed, venture capital firms have raised less money, just $16.7 billion last year compared with $25.93 billion in 2008, according to the National Venture Capital Association.

Sequoia is part of an elite group of funds whose results stand out from the venture-capital pack, investors say. It can raise money for each of its venture funds in a matter of days, with so many existing investors clamoring to reinvest that there is little room for new ones.

Last year, it raised $1.17 billion for three funds, including $533 million for its flagship Sequoia Capital XIV, according to regulatory filings.

Its popularity endures as other parts of the venture business are competing with new sources of funding, such platforms that make it easy for rich individuals to make “angel” or early stage investments. Meanwhile, because the cost of so much technology, such as servers, has dropped drastically in recent years, many start-up founders can build their companies to sizeable levels without the need to turn to venture backers.