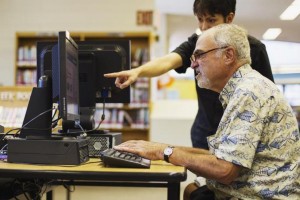 Americans are living longer and spending more. That’s why some people think the “gray market” is a golden opportunity.

By 2030, one in five Americans, or 72 million people, will have reached retirement age, according to population projections by the Pew Research Center. That’s more than twice as many seniors as there were in 2000. But, so far, venture funding for technologies targeted at the senior population remains anemic.

In a recent study, retirement lobby group AARP found that from 2001 to 2010, VC investment in startups that target the 50-plus market, which covers 104 million Americans, was only $2 billion, a sliver of the total venture investments of $250 billion in the period.

Jody Holtzman, senior vice president of thought leadership at AARP, is on a mission to change that. For the past several years, he’s been knocking on VC doors, explaining why this opportunity is too big to ignore. His group has also helped promote entrepreneurship in the 50-plus care space by organizing startup contests around senior care innovation and partnering with health-related accelerator programs like Startup Health and Rock Health.

“This is an emerging market in plain sight that nobody sees,” Holtzman said. “It’s kind of bizarre. If we were a limited partner in your fund, we would want to know why you would leave money on the table by ignoring a market of over 100 million people who spend over $3 trillion per year, and is the only humongous growth market that exists.”

People familiar with the gray market (some call it the longevity market or, more broadly, the 50-plus market) point to a number of interesting young companies in the space, some of which have raised modest sums of capital:

VCs have their reasons for avoiding the senior care market, which basically boils down to “show us the money.” To date, there hasn’t been much of it. The only noticeable exit in the space happened in 2006 when Lifeline Systems, makers of the emergency alert necklace for seniors, sold to Philips Electronics for $750 million.

But the senior care market faces another challenge — the bias of venture investors and startup founders.

“VCs are attracted to the shiny new objects that appeal to the young market, not the older sophisticated consumer.” said Clayton Lewis, a partner at Maveron, which is one of the few VCs actively investing in the space. “But that’s why I love this market, because I don’t see a lot of competition. There is too much money chasing the same me-too ideas. This is an opportunity that’s off the grid.”

“The size of the senior market continues to grow rapidly, but there were really no great advances on the technology side.”

His signature deal in the market is Lively, which was seeded by Maveron. Lively focuses on the so-called “Aging in Place” market, which comprises technology solutions that enable seniors to live in their homes for as long as possible. The marketplace for technology to assist aging adults is expected to grow from $2 billion today to more than $20 billion by 2020, according to market research firm Aging in Place Technology Watch.

Lively is a network of sensors placed throughout the home The sensors feed activity information to an online dashboard, so family members can log on and check to see if mom is eating regularly and taking her medicine. Alerts are generated if, say, she hasn’t opened the silverware drawer in two days.

Clayton helped formulate the idea for the company after noticing a huge gap in the senior care market.

“I’m really interested in healthy aging, but after looking at legacy companies in home health monitoring, I noticed there hadn’t been any innovation since the LifeLine product,” he said. “The size of the senior market continues to grow rapidly, but there were really no great advances on the technology side.”

Holtzman said that’s because there’s a myth that people over 50 don’t use technology and thus it’s okay to dismiss this market. The reality, however, is that 78% of people over 50 are online (which translate to more than 80 million people), and 50 million of them are on social networks like Facebook and Twitter, according to Forrester. Additionally, more than half of them shop online, spending $7 billion a year.

But because of this myth, the current offerings in the market are suboptimal, Holtzman said. They are hampered by poor design and aesthetics, are focused only on the sickest and most frail, lack connectivity and the ability to collect data, and are rife with condescending marketing messages.

“Entrepreneurs that can develop solutions that overcome these weaknesses will find significant opportunity and competitive differentiation,” he said. “And investors who identify startups that effectively address these weaknesses are likely to be rewarded.”

Lively, for its part, is differentiating itself by making its system less about monitoring and more about social connections. Lively is transforming its online hub into a social network of sorts by allowing family members to share photos and messages. For instance, the system can automatically pull photos from a Facebook feed, print them, and deliver a physical scrapbook via snail mail to grandma twice a month.

“If you count total number of connected devices and sensors applied to elder care today, it numbers in the low 10,000s, compared to an addressable market of 40 million today and growing to 70 million.”

Gavin Teo, a senior associate in San Francisco at Comcast Ventures, is also taking a close look at the longevity market. He noted that the promise of elder care technology in the home has been around for a decade, but has never really taken off. He said he believes there are now regulatory and demographic tailwinds that will accelerate growth in the space.

“With Obamacare and the focus on accountability, when you send a patient home, you have to make sure they stay healthy and don’t come back again,” he said. “The healthcare ecosystem is lining up behind technologies that can help with prevention and avoid crash and burn situations.”

Comcast has not yet made an investment in the space, but with its parent company, the large cable company Comcast Corp having a reach into 110 million U.S. households, the firm believes remote monitoring for health and safety is a huge market opportunity.

“If you count total number of connected devices and sensors applied to elder care today, it numbers in the low 10,000s, compared to an addressable market of 40 million today and growing to 70 million,” he said.

Mary Furlong is another person who can’t figure out why there is so little venture activity in this market compared to the size of the opportunity. Furlong produces the annual Silicon Valley Boomer Venture Summit and is CEO of consulting firm Mary Furlong & Associates.

“Technology will play a big role in helping boomers navigate through the aging process,” she said. “But for some reason, VCs don’t have it on their radar screen. I’ve seen so many young entrepreneurs try to get funding, but investors don’t see this space as a Twitter or a huge 100x opportunity.”

Furlong is confident that market perceptions will ultimately change. She’s just hoping it happens before she’s old and gray.