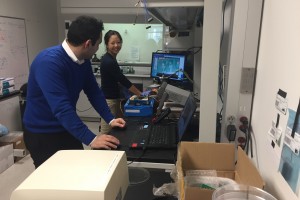 Kapplex, a Canadian developer of instruments and consumables for diagnostic markets, has been acquired by U.S.-based biotechnology company Miroculus. No financial terms were released. Kapplex was spun-off from the University of Toronto in 2012 in partnership with MaRS Innovation. Its combination with Miroculus will create a single platform that supports clinicians in detecting complex conditions, such as cancer, in a minimally invasive way, the companies said. San Francisco’s Miroculus has raised funding from angel investors and venture capital firms, including Nazca Ventures.

TORONTO and SAN FRANCISCO (May 3, 2016) — Miroculus, a San Francisco-based biotechnology company specializing in microRNA-based diagnostics, today announced an agreement to acquire Toronto-based Kapplex Inc. The Canadian company’s proprietary Digital Microfluidic (DMF) platform is built upon the research of Dr. Aaron Wheeler, a world-leader in microfluidics research at the University of Toronto.

When combined into a single product, the Miroculus-Kapplex technology will allow clinicians to detect complex conditions, such as cancer or infectious diseases, in a minimally invasive way, allowing patients to be diagnosed without experiencing invasive, operator-dependent, expensive procedures like endoscopies or biopsies, among others.

Through the acquisition, Miroculus will be able to automate and simplify the detection of microRNAs (miRNAs) from blood using Kapplex’s digital microfluidic technology, significantly reducing the cost of the tests and making the technology available to the labs and health providers in limited resource settings. In the future, Miroculus will use this technology to expand beyond microRNAs and eventually look for multiple biomarkers to provide increasingly accurate diagnostics.

“We’re pleased to join teams with Kapplex,” said Alejandro Tocigl, Miroculus’ CEO. “We see increasing demand for decentralized testing, and both companies are dedicated to improving patient-centric care while bringing the diagnostics closer to patients in an automated, accurate and affordable way. Combining our efforts will allow us to combine novel miRNA detection chemistry, bioinformatics, and database support with their powerful and versatile microfluidic platform.”

The company was spun-off from the university in partnership with MaRS Innovation and the Innovations & Partnerships Office in 2012. Under the deal terms, Kapplex will become Miroculus’ Canadian subsidiary, retaining its existing offices in the MaRS Discovery District, which have the added benefit of close proximity to co-founder Dr. Aaron Wheeler’s laboratory at U of T.

“We are excited to partner with the Miroculus team to combine our complementary technologies,” said Dr. Irena Barbulovic-Nad, Kapplex’s co-founder and CEO. “Kapplex has been developing a versatile platform for immunoassays and molecular diagnostics which we will put in use now to detect microRNAs in blood samples. MicroRNAs are a very promising and multifaceted biomarker. We look forward to building the future of diagnostics with Miroculus.”

“Mergers and acquisitions are becoming a popular way to advance promising early-stage technologies,” said Dr. Raphael Hofstein, president and CEO of MaRS Innovation. “The Miroculus-Kapplex agreement is a good example of a team up between complementary technologies, and will maximize their combined opportunity to deliver a product to the market. After mentoring the Kapplex team on intellectual property strategy, go-to-market and product development strategies, and embedding our business development, accounting and marketing staff within their team at appropriate stages, we are thrilled by this development.”

“From the beginning, our goal was to find the best opportunity to bring Kapplex’s technology to market as a product,” said Dr. Aaron Wheeler. “In addition of the critical support we received from MaRS Innovation and the university, Kapplex also benefitted from other organizations in Toronto’s growing start-up ecosystem, including the Ontario Centres of Excellence and MaRS Discovery District. We look forward to advancing our product with Miroculus in California and expanding our team here.”

Miroculus logoMiroculus, a San Francisco-based startup, is bringing forward the most affordable and easy-to-use microRNA-based diagnostic platform. The company aims to radically improve the ability of healthcare providers to diagnose, treat and monitor diseases at a molecular level through the examination of microRNAs. The Miroculus platform aims to detect microRNAs from body fluids or tissue without the need of a specialized technician or expensive lab machinery, making microRNA-based diagnostics more affordable and scalable than ever before.

Kapplex is a Toronto-based startup developing sensitive, high-performance and multiplexed point-of-care diagnostic platforms suitable for use in doctor’s offices, urgent care, and emergency rooms to enable clinicians to rapidly and accurately diagnose a disease at a patient’s first visit and significantly improve the course of treatment while reducing healthcare costs. The Kapplex instruments and consumables are driven by a proprietary Digital Microfluidic (DMF) platform developed in Dr. Aaron Wheeler’s lab at the University of Toronto. DMF dramatically simplifies and automates traditional sample preparations and analyses on a single, low-cost chip driven by a low-cost instrument.