The Thomson Reuters’ Post-Venture Capital Index (PVCI) ended 2015 on a down note, and it started the new year singing the same tune.

The PVCI dropped 51.72 points to finish January at 675.95. It was the fourth consecutive monthly decline.

The Jan. 29 mark was also the lowest month-ending point for the PVCI since September 2011.

It’s no surprise, given that the PVCI typically swings with the fortunes of the Nasdaq and S&P 500 indexes.

At the end of January, the PVCI was comprised of 484 companies. Of the stocks tracked, only 78 advanced in value during the month while 406 declined. The number of companies in the index rises and falls, depending on new issues or as the companies fold or are acquired. Also, companies remain in the index for only 10 years.

A total of 89 of the declining stocks in December were in computer software and services, followed by 83 in the biotech sector.

Facebook remains the market leader, according to the PVCI, while the three top market laggards are Tesla Motors, Energy Transfer Equity and Twitter. 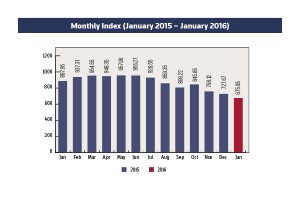 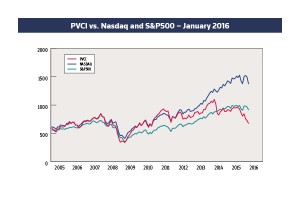