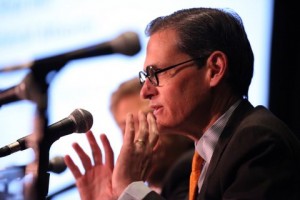 Startup founders have long turned to banks for loans and second mortgages to fund their first months of operation. But when it comes time to scale, they look elsewhere for funding.

For fintech entrepreneurs, that may be changing.

Big banks and financial services companies have been scaling up internal venture divisions in recent quarters, seeking to fund and partner with startups that can help them beef up their backend technology or expand their customer base.

At least three have announced new fintech venture arms of $100 million or more since last year.

More are running or participating in fintech-focused incubator and accelerator programs, such as Capital One’s network of “digital innovation labs” and the three-city Fintech Innovation Lab organization.

Big banks and financial service providers have also participated in or led some of the largest recent fintech venture funding rounds for such companies as investment advisor Betterment, mobile payments provider Square and analytics provider Platfora.

“There’s a fairly major shift from, ‘We can build it in-house’ to ‘We won’t build it in-house,’ among big financial services players, said Maria Gotsch, CEO of the Partnership Fund for New York City, which oversees the city’s chapter of the Fintech Innovation Lab.

Gotsch compared the present situation in the financial services business to the pharmaceutical industry, where big players have reduced internal R&D spending on drugs in favor of working with startups for developing pharmaceuticals.

It’s much the same in fintech, Gotsch said. Large players find that startups excel at generating ideas and prototypes, but they want to be involved at later stages to help develop products robust enough for their massive, highly regulated markets.

In the past four quarters, 158 financial services companies have raised $968 million in venture funding, according to the MoneyTree Report. … Corporate VCs in the financial services space are accounting for a growing share of committed capital.

The ramp-up in corporate fintech investments comes as the space in general is seeing sizeable funding activity.

In the past four quarters, 158 financial services companies have raised $968 million in venture funding, according to the MoneyTree Report by PricewaterhouseCoopers and the National Venture Capital Association, based on data from Thomson Reuters. However, that number doesn’t include companies that provide security, customer relationship management, or content services to multiple industries including the financial sector.

Corporate VCs in the financial services space are accounting for a growing share of committed capital. Some have been involved in venture dealmaking for many years, with few signs of slowing momentum. Others are relative newcomers.

In the first category, American Express, which has been making strategic venture investments for more than a decade, has cited financial inclusion as a core focus area. The originator of the Gold Card says on its website that it’s looking to entrepreneurs to further its goal of providing better access to financial services for underserved consumers and businesses.

AmEx is also looking to invest in companies that can improve its capabilities in fraud detection, customer acquisition, and mobile commerce, among other areas.

Citigroup has also been scaling up its efforts. The company’s venture division, Citi Ventures, was established in 2007, but has made many of its largest investments since last year. The list includes Betterment and Square as well as a few security and big data companies, including Ayadsi, an analytics provider, and Pindrop Security, which provides call center authentication.

Meanwhile, Capital One Labs, a two-year-old effort, is directing its efforts into such areas as mobile payments and small business lending. It’s also partnering with startups, such as microfinance platform Kiva, as well as developing apps in-house.

Several banks are in the early stages of building venture portfolios. Banco Bilbao Vizcaya Argentaria, one of Spain’s largest banks, is in the process of investing about $100 million through its BBVA Ventures arm, which is based in San Francisco.

Investments include SaveUp, which offers prizes for saving money, and SumUp, a service for processing credit card payments with smartphones and tablets. The bank has also invested in early-stage venture and seed funds, including fintech-focused Ribbit Capital and 500 Startups.

Sberbank, Russia’s largest bank, has set up a $100 million venture fund that it says could rise to as much as $700 million over three years, with a mission of investing in promising fintech startups.

Bank executives say the goal is to find companies that have customers and a viable product which Sberbank can look at for its own operations. So far, Sberbank has been fairly quiet about disclosing investments, though the firm announced last year that it was leading a $12 million Series B round for Sequent, a provider of payments security technology.

More recently, Santander UK, the British financial services arm of Europe’s largest bank, announced in July that it is rolling out a $100 million fund for fintech fund that will be based in London. The fund will focus on online lending, digital delivery of financial services and big data.

There are some unifying themes among banks’ corporate venture strategies. They’re largely targeting similar sectors outside of fintech, with a keen eye to security and big data.

Today, more of the emerging technologies that the banks are looking for are coming from outside of financial services and migrating in, Gotsch said. That’s a contrast from several years ago, where it was more common to see Wall Street veterans launching fintech startups. Services that work in other industries typically need adjustments, such as moving from public cloud services to private ones.

Big banks, cognizant of their long and complex procedures for integrating new technologies, are also looking to fund and partner with startups to enable speedier and smoother rollouts.

In the past, the long product development and adoption cycles of large financial services companies have been presented a huge obstacle for startups that want to work with them, said Hans Morris, a former Visa president who runs a fintech venture firm called Nyca Partners.

Looking ahead, it’s unclear to what extent financial services companies’ increasing appetite for venture will translate into acquisitions.

To date, those with internal venture arms haven’t been in the habit of buying the companies they back. For now, the focus appears to be on keeping up with emerging technologies, supporting faster integration of new product offerings, and beefing up backend systems to meet rising security threats.

Should their interests in acquisitions perk up, however, financial services providers clearly have the deep pockets to make deals happen.