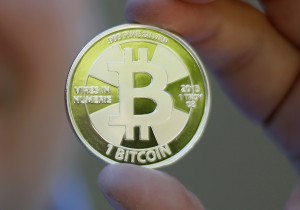 Bitcoin faces no shortage of challenges. Its price is volatile. Its regulatory environment is uncertain. Its consumer uptake is slow. It attracts hackers, could be deflationary and transactions take a long time to clear.

Few of these flaws will be ironed out anytime soon.

So why the investor excitement? The answer is simple. Bitcoin holds the potential for huge disruption.

The most obvious industries in its path are the credit card and remittance industries, where fees of 2% to 9% invite low-cost alternatives. Next up are the banking and financial services industries, trillion-dollar plus markets where the prospect of a universal, open source, peer-to-peer currency and payments platform could change the business landscape and its reliance on high transaction fees.

All this will take a while to play out.

On the regulatory front, guidance from the Internal Revenue Service is possible this year, resolving some uncertainty. After all, if you bought a bitcoin for $80 and sold it for $990, you need to know how to report it on your taxes.

But deciding whether to regulate bitcoin as a currency or commodity, such as gold, is a debate likely to continue for years, largely because it involves competing agencies from governments around the world, including the U.S. Treasury Department.

As to volatility, greater trading volume and a larger global infrastructure will help. But significant expansion of the currency and the growth of its mining backbone will take time. It isn’t helped by the fact that many on Wall Street continue to see it as a bubble waiting to pop, even though prices are down from more than $1,000 last fall.

“This bitcoin thing is a marathon, not a sprint,” acknowledged Pamir Gelenbe, a partner at Hummingbird Ventures and founder of the CoinSummit conferences. “It’s going to take 10 to 15 years.”

Still, there are encouraging signs. Merchants, such as Overstock, Zynga and Target, are showing interest in accepting bitcoin. And while banks don’t yet support it, at least one test is under way between Coinbase and Silicon Valley Bank, according to sources. Coinbase declined comment.

Meanwhile, exchanges are popping up in numerous countries around the globe.

To some observers, bitcoin’s adoption is likely to be more rapid in developing countries without well-established banking systems. So regulatory moves from a small handful of nations might be enough to kick start use. This might get the ball rolling faster. Bitcoin could help fill the need for a system to store and exchange monetary value and replace makeshift remittance procedures, such as the transfer of cell phone minutes that recipients in developing countries receive and turn into cash.

For boosters, this is enough to justify their interest.

“There is a decent chance that bitcoin ends up being a widely-used, alternative payment mechanism in the same way the Discover card or PayPal are widely-used payment mechanisms,” said Jeremy Liew, a partner at Lightspeed Venture Partners and an investor in the space. “They certainly are not dominant. But they are widely used and many merchants accept them.”

This, of course, could amount to a huge win