When Benhamou Global Ventures announced a first close on its $75 million third fund this September, it made a point of highlighting several Chinese LPs among its new investors.

Andrew Chung benefitted from Chinese money, too, when he raised $200 million for his 1955 Capital earlier this year. A significant number of LPs were from China and Southeast Asia, he said.

A new source of capital is coming to U.S. venture from the world’s second largest economy and it could be substantial. Most observers expect an aggressive expansion in coming years with powerful implications for GPs and entrepreneurs.

Already, the numbers are worth taking note. Since the start of 2015, Chinese investors participated in 196 deals with U.S. startups, or more than one every three days, according to data from Thomson Reuters. It is a big rise from just a couple of years earlier. During the last two years, they joined $9.8 billion in venture fundings, or slightly more than 10 percent of all financings.

That doesn’t include the money Chinese LPs quietly put in venture funds.

“All up and down the chain, from early stage all the way through to growth, there’s an increase in capital that will continue,” said Erik Lassila, a managing partner at Peakview Capital. “It will increase as Chinese investors, both institutional and individuals, get more exposure and understanding and trust of investing overseas.”

There are good reasons to welcome the cash. Startups and firms gain access to a new source of capital, and the expertise that frequently comes with it for penetrating the Chinese market.

It could help build bridges between the two disparate cultures and business interests, sparking cooperation in such fields as energy, clean air and nuclear reactors.

But it also could spark new competition for deals and inflate valuations, should it grow at the pace some expect. GPs contend it is already propping up deal pricing in sectors that otherwise might have felt the pressures of this year’s valuation swoon.

From a Chinese perspective, there are complex and varied reasons for the capital flow. In a broad sense, it is the reversal of a decade ago when U.S. money poured into China, chasing venture opportunities tied to the growing middle class.

Now with abundant new wealth created in China and investment opportunities there feeling the strains of slower growth, high prices and tightening regulation, money is flowing in the opposite direction.

At the root of the shift is a Chinese economy that isn’t the growth engine it once was and a renminbi that has appreciated in recent years, making overseas assets look more inviting. Add in changes in government policy on real estate and wealth management products and local opportunities look different.

The result has been a push for diversification. For years, this meant real estate, public equities, energy projects and commodities. Now it is turning to venture capital.

“We’ve been seeing this building for a while,” said Jeff Richards, a managing partner at GGV Ventures, referring to the flow of Chinese capital moving abroad. It is driven by asset diversification, he said.

Behind the current focus on startups is a strong interest in Silicon Valley innovation and a feeling that on a relative basis prices are reasonable.

“Given how overheated and competitive the Chinese market is for local funds and deals, despite rising valuations here, things can look relatively attractive,” said Chung, a managing partner at 1955 Capital.

That means the risk-return makes sense to them, said Yi Pin Ng, a managing partner at Yunqi Partners. They may not live in the states and therefore need to confront the uncertainties of long-distance investing. But many individuals and tech entrepreneurs appear to view the risk premium about the same for the U.S. and China, he said.

This is partly due to a growing maturity toward the asset class.

They are getting more comfortable with the fee structure of U.S. venture funds, said Gary Rieschel, founding managing partner at Qiming Venture Partners in China. And they have greater visibility into what’s happening in U.S. Internet and consumer-related tech deal making. This has been enhanced as some high-profile Chinese companies have found success in the states, one of the more recent being Musical.ly.

The diversity of the participants gives the trend its potential longevity. Cash is coming from family offices, corporations, insurance companies, sovereign wealth funds, banks and wealthy individuals, who made money at Alibaba, Baidu or Tencent, but also from textile, heavy equipment, oil and gas, and other manufacturing businesses.

GPs say a big portion of the money is seeking LP relationships. “We’re seeing an increase (in interest) from Hong Kong and China,” Richards said.

Corporate investors also have stepped up their strategic investing, and not just technology firms, but old-line industries, including real estate and industrial outfits, looking for innovation, product rights for the Chinese market and even acquisitions.

“They want to be truly global,” said Barry Kramer, a partner at Fenwick & West. “A good number of them are very astute as to what’s going on in Silicon Valley.”

For some, this savvy that has led to a desire to lead deals and not just follow. Others are willing to take early-stage risk that U.S. investors avoid, or put extra dollars into a round.

“They are getting deals because they have real value-add,” Kramer said. “I certainly see a lot of corporate investment.”

During this year and last, for instance, Thomson Reuters recorded 44 deals from Chinese corporate investors, a number that likely understates the total. Tencent alone completed 10 deals.

Venture firms from China also are getting into the act. In many instances, the firms target companies that have plans or future expectations to do business on the mainland. Investors expect to be able to assist either through introductions or advice on operating there.

“They are all operating at world scale,” said Donald Dixon, a managing director at Trident Capital Cybersecurity. “I think it’s a very significant trend.”

Trident Capital wouldn’t have been able to continue to develop its portfolio company Amprius without Chinese capital, he said.

Many observers expect the trend to remain in place for some time, though China has tightened regulations on capital outflows and may continue to do so.

“Definitely there is a strong interest on the part of Chinese to invest in the U.S.A,” Lassila said.

The challenge they face is getting into the best funds and deals when they don’t have trusted relationships.

“There is strong demand to invest overseas, but not very much supply,” Chung said. “It’s not always easy [for Chinese firms] to get access to the highest quality platforms or well-priced deals.”

Cultural barriers also pop up. Many Chinese LPs expect a tighter bond with GPs, which might include greater information sharing, more involvement in decision making, even an equity stake.

Chung said he dealt with these concerns as he signed up investors for his fund. 1955 Capital was able to build “close bonds with committed LPs while maintaining strict independence and fund terms typical of U.S. GPs,” he noted.

Long-term relationships will help clear some of these hurdles. As these ties develop, expect more money to flow. 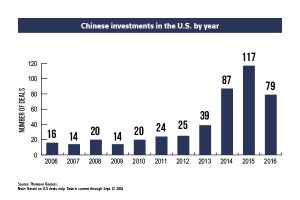