Corporate venture suffered a tarnished reputation in the wake of the dot-com crash, when dozens of programs exited the business and left portfolio companies short of follow-on capital.

Whether a similar exodus, and stain, follows the next economic downturn is a hot question in the venture capital today. There are good reasons to believe the VC community is more durable this time, and that corporates better understand the need for innovation and the way to structure investment efforts for longevity.

But it is highly likely at least 20 percent, and perhaps many more, of today’s programs could find the rug pulled out from under them should a significant turn in the economy take place, according to interviews with corporate venture capitalists and industry experts.

Corporate investing has been strong in recent years. Rounds with corporates accounted for 50 percent of capital deployed in the United States last year, a big increase and a percentage that has been rising steadily for almost a decade, according to PitchBook and the National Venture Capital Association.

Clearly, the impact of a downturn on this ebullient trend is top of mind for these investors, as they evaluate how to prepare. There already are signs more sophisticated programs are showing some caution as financial markets roil and economic growth is brought into question.

In numerous ways, many corporate programs rolled out during the expansion of the past decade appear more thoughtful than the ones sparked by the dot-com fervor of two decades ago. More have experienced investors and better metrics to assess corporate benefit, though some of these metrics remain a work in progress.

“What I see is a more mature market place,” said Mark Radcliffe, an attorney at DLA Piper. CVCs better understand the strategic importance of backing young companies to spark internal innovation, and this is in large part because “in 35 years of doing this I have never seen a time of such rapid and sweeping technology change.”

Yet in the event of a significant downturn, programs will be cut back, though probably not as deeply as in 2000 and 2001, Radcliffe said.

The casualty rate will likely be highest among new entrants to the business.

Top programs seem to be steeling themselves for such a change. At JetBlue Technology Ventures, President Bonny Simi has told portfolio companies that rounds may take longer to close and to be sure to have money on hand to last a year, not just six months.

Yet, she said the program as an integrated portion of the airline and believes the message of its value is understood. Value is measured in terms of increasing revenue, decreasing costs, improving customer service and not being blindsided by new technology, Simi said.

There is also a sense of opportunity in change, particularly Brexit, as the firm potentially could become more relevant to startups in the United Kingdom.

At Samsung, which kicked off its Catalyst Fund about six years ago, there is a similar sense the program will help identify new verticals. Yet there also is some concern about 2019.

“We have to be careful with what is happening around us,” said Shankar Chandran, head of the fund, speaking on stage in late January at the Global Corporate Venturing & Innovation Summit in Monterey, California, where more than 800 industry members gathered.

“We have to help our companies get through difficult times,” Chandran said. “We are in the business for the long term.”

This means helping with follow-on financings and bridge rounds. For companies that have value, “we will do everything we can to support them with our partners,” Chandran said.

“I think the industry is here to stay,” added Quinn Li, head of Qualcomm Ventures. He said Qualcomm will probably not decrease its investing in a downturn, and may come to see it as an opportunity.

With valuations down and fewer firms doing deals, “it’s a great opportunity for us to find deals at better valuations,” Li said.

Yet the pace of business may look quite different across the broader sweep of the industry. In the event of a significant downturn, 10 percent to 20 percent of corporate programs may decide they don’t have the stomach to maintain their investing and exit the business, estimated Scott Lenet, a co-founder of Touchdown Ventures.

And the fallout could be far worse if an economic pullback becomes severe, or conditions at a particular company deteriorate substantially.

This is because many programs, even ones with significant pedigree, are still honing the metrics they use to manage and run their investment groups.

At American Express Ventures, which now has 50 investments and was fortunate to have started early in the cycle of fintech innovation, the firm understands the need to add value to a portfolio company in short order, said Harshul Sanghi, global head.

It is now becoming more of a thesis-driven investor and more granular in understanding sectors, said Sanghi, who spoke at the summit.

Initially, the challenge was cultural, or learning to move faster with new product introductions. Now the challenge remains finding people and talent for the team and the business, he added.

More CVCs nevertheless understand the need to stay involved than they did in the 1990s, said Lisa Lambert, who helped kick off National Grid Partners last fall and is bringing rigor to the new program.

Lambert, a senior vice president, said she is hiring new investors with a minimum of 10 years experience and a minimum of a 20 percent IRR, so that they understand the financial side of investing.

The program also attempts to assure strategic alignment by insisting that a majority of its investments, which has a target of 80 percent, has a letter of intent to clearly define strategic engagement. The remaining 20 percent to 25 percent of deals are more forward thinking, where strategic engagement might be in the cards two to five years down the road.

Lambert also pointed out the program has investment, incubation and business-development functions: “I think the companies that are really serious about it are going broader.” 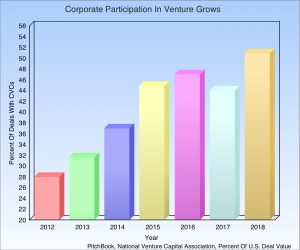 What seems evident is that the way programs measure their value will determine their ability to survive. Programs most likely to face cuts during a downturn are those that base their strategic value on striking joint marketing deals with portfolio companies or encouraging direct product sales to business units, according to corporate investors and industry observers. Often, business unit deals bring in relatively little revenue and as a result their business-unit champions can lose interest. This makes their value less important during a downturn.

More critical to a corporation is a general sense of corporate learning and awareness. This value should continue in a downturn. Another route to avoiding cuts is by tying CVC value to M&A, which also remains critical to a parent company in difficult times.

At the same time, financial metrics, by themselves, are not enough. Financial returns may be necessary to keep a program from becoming a cost center, but optimizing for IRR is not a guarantee of longevity, these experts said. Returns from a venture unit are generally not large enough to matter on a corporate balance sheet.

On the other hand, turnover at the top of a corporation seems to be playing a smaller role in sinking corporate programs than in the past. Corporate venture is becoming a more important tool to understand innovation, and corporate “boards are not hiring CEOs that don’t like innovation,” Lenet noted.

Perhaps the most significant factor to gauging the survival of a venture unit is patience. Strategic value from an investment typically takes three to five years and a program needs to be in place to harvest it. Still many are structured as discretionary spending, with cash coming off the balance sheet.

In that case, “every year you need to justify your value,” Lenet said.

It is no simple thing to do.