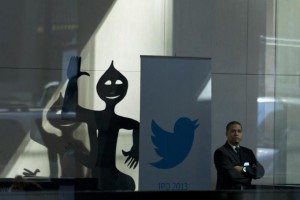 For Twitter Inc’s early venture capital backers, some of whom stand to make over 500 times their investment when the company goes public, now is a time not just to celebrate but increase their stakes in mobile and social media, affiliated news service Reuters reported.

Take Bijan Sabet, the partner at Spark Capital who led his firm’s investment in Twitter in 2008. At the time, according to a person familiar with the matter, Twitter was valued at $100 million. This week, the company is seeking a valuation of up to $13.6 billion in its initial public offering.

“Most of what I’ve been doing,” Sabet said in a phone interview, “is being hyperfocused on consumer Web and mobile products.”

That includes investing in some of the same people who brought him Twitter. One of them was Lift, a mobile phone app that promotes positive habits, which grew out of the Obvious Corp, the incubator created last year by Twitter co-founders Biz Stone and Evan Williams.

In May, Sabet invested in Stone’s latest venture, Jelly, which has not announced details of its business except that it plays into consumer- and mobile-oriented themes – and takes its inspiration from the brain of jellyfish.

“For the past 700 million years, this decentralized structure has been wildly successful,” Stone wrote in a blog post about his new venture.

Mike Maples, the managing partner of Floodgate Fund who invested $25,000 in Twitter in 2007, when the company was valued at $25 million, said he is developing a strong interest in what he calls programmable services.

By that, he means efforts to use the Internet to organize everything from a ride to running errands. He has invested in the ride-sharing firm Lyft and the odd-job platform Taskrabbit.

Perhaps the archetype of this type of investment is a Floodgate portfolio company called IFTTT, which stands for “If This, Then That.” The start-up allows people to set up ongoing pattern-based services. If someone is tagged in a Facebook photo, for example, the service could automatically send him or her a text message.

An important element of Maples’ strategy is the medium. Over time, the devices tied into programmable services will broaden to include almost any surface – not just phones, but anything from glass to a road sign to a countertop.

In a similar consumer vein, George Zachary of Charles River Ventures has invested in Pebble, the smart watch company, and Udacity, the online education company. His original investment in Twitter was $250,000 in the 2007 funding round.

He does not plan to stick to consumer companies, or any particular theme at all.

“We don’t have microtheses about what we should invest in,” Zachary said. “If you have very fine-grained theses, it’s easy to miss big opportunities.”

Zachary’s portfolio includes helpdesk service Zendesk, which analysts expect to hold an IPO next year. Business-network software company Yammer, another of his investments, was bought by Microsoft Corp last year in a $1.2 billion deal that earned Charles River a $200 million return, he said.

None of the earliest investors in Twitter are selling shares in the IPO, although Union Square and Spark had sold some shares previously. Despite their continued faith in social media, none claim to have anticipated the level of Twitter’s breakout success.

“I always felt like it was going to be a very important company,” Sabet said. “The level of where it is today, it would be inaccurate to say I saw all that coming.”

Pricing of Twitter’s shares ends Nov 6, with public trading of the stock expected for Nov 7.