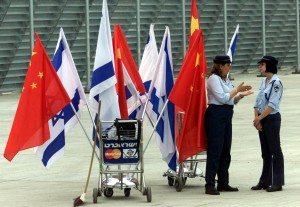 China Everbright Ltd (CEL) and Israel’s Catalyst Equity Management said they have raised $100 million for a private equity fund that will invest in Israeli companies.

The Catalyst CEL Fund will target mid-to-late stage companies with proven innovation, whose strategy includes expansion into emerging markets with a special focus on China, or firms with products that have significant commercial potential in these markets.

“Our goal is to reach $200 to $300 million. We just had our first closing of $100 million but we have strong interest from Chinese, Israeli and international investors to join the fund,” Edouard Cukierman, managing partner of the Catalyst CEL Fund, told Reuters. “We are confident we will be able to reach our goal by the end of this year.”

The fund is examining investments in mature companies in sectors such as Internet, mobile technology, medical devices, agro tech and water technology. The first investment is expected to be made in the coming weeks.

Each investment will range between $20 million and $25 million. Catalyst managing partner Alan Dobkin said the fund has the ability to do much larger deals as its limited partners can co-invest alongside it.

CEL managing partner Shengyan Fan said the fund was looking at companies with very strong management and operations and proven track records in North America or Europe but that have not been able to make inroads into China.

“We are willing to provide strategic support for such initiatives,” she said.

Fan said Chinese companies are looking for investment opportunities outside China as they seek new markets, customers and resources.

“Israel is known for innovation. That’s definitely something Chinese companies and investors are interested in,” she said.

The Spanish region of Andalusia is to benefit from a 10 million euro ($14 million) seed and early-stage digital fund managed by Madrid-based Axon Partners.

Axon raised its ICT II fund with the help of European Union money and private investment, and will invest up to 1.5 million euros in digital economy companies that have operations in Andalusia.

Despite the fundraising, one of several early-stage initiatives to have emerged in Spain in recent months, ICT II’s manager is wary of talk of a venture  recovery in Spain.

“With the help of some government money, we are finding a bit easier to convince private investors to invest in VC, but most of them are still reluctant,” Carlos Rodríguez-Maribona told VCJ.

Historically, the London-based firm has focused on buying portfolios of assets from liquidity-seeking investors such as private equity funds, hedge funds and banks.

“Direct secondary firms have always first found a portfolio to take to their investors, but this fundraising was the other way round, so now we’re able to do individual company transactions,” Azini’s managing partner, Nick Habgood, told VCJ.

That’s a boon for Azini, he said, because there are now fewer portfolios available than five years ago, when the secondaries market began to blossom.

New York-based Lexington Partners provided most of the new fund’s capital, just as it did for Azini’s 2010 vintage, $100 million vehicle.

A paltry 1.1 billion euros ($1.5 billion) was committed to German buyout, growth and venture funds in the year, despite some rare happy news for venture capital managers, who recorded a 15% increase in fundraising.

VC investment was also up from the previous year, although the 674 million euros ($937 million) channeled to 723 companies represented a less active market than in 2010 or 2011.

Nonetheless, even modest year-on-year growth appears attractive when set against the 33% collapse in investment by German growth and buyout funds.

The BVK expressed confidence that private equity funding would recover this year to 2012 levels — when 6 billion euros was invested — due to continued low interest rates and some encouraging results from its last Private Equity Barometer survey.

The manager has raised 10 million euros ($14 million) from French sovereign fund Bpifrance and 32 million euros from a group of care providers.

Its SISA fund will back companies developing technologies that grant old people more independence, such as sensors and robotics, as well as business that offer organizational innovations in social care.

“This sector, which includes e-health, IT, mobile health and health services is a major growing market due to an ageing population that wants to remain in good health in the community and at home,” Chantal Parpex, president of Innovation Capital, told VCJ.

Parpex added that the firm is hoping financial institutions and industry investment take the fund to its final target of €100 million ($140 million).

Siemens, the Munich, Germany-based engineering conglomerate, has capitalized a $100 million fund to explore pioneering technologies in industrial automation and manufacturing.

The early-stage fund marks a shift in focus for Siemens’ venture unit, which has historically focused on later-stage investments via separate funds dedicated to each of its parent’s core competencies: energy, healthcare, infrastructure and industry.

The new Industry of the Future Fund will invest “up to the low millions” per deal, prioritising businesses that add strategic value to Siemens.

“That said, we will only invest in a start-up where we see genuine potential for strong growth and profitability, so the investment case needs to add up as well,” Ralf Schnell, CEO of the venture unit of Siemens, told VCJ.

Of the 180 companies that the corporate venture unit has funded in its lifetime, about 10% were subsequently acquired by Siemens.

As of February, the new fund had invested in a cybersecurity and a 3D visualization business.

Abingworth has closed $375 million for its 10th life sciences fund. Asante Capital Group was the placement agent. Based in London, Abingworth focuses on the life sciences and healthcare sector.