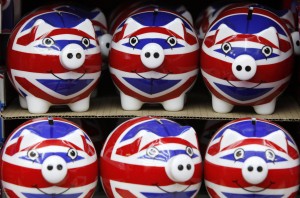 Balderton Capital, one of Europe’s largest venture capital groups, is in the market for a fifth fund, according to a recent regulatory filing.

The filing does not include the total offering amount, but according to data from Thomson Reuters (publisher of VCJ), the fund has a target of about $400 million, which is about $30 million less than the firm’s fourth fund, raised in 2009. It has not yet held a first close on Fund V.

The new fund lists an address in Guernsey, one of the Channel Islands off of the coast of Normandy, France, a popular offshore finance center that is not part of the European Union.

Of the six partners and three principals that Balderton lists on its site, just one partner, Barry Maloney, is listed in the filing as an executive officer of the new fund. Barry McClay and Andrew Carre, employees of Ipes, a Guernsey- based private equity fund administrator, are also listed as executive officers of the fund.

A row of piggy banks adorned with the colors of Britain’s Union Jack flag.

The firm made $140 million off the $850 million cash sale of social network Bebo to AOL in 2008. It also made what Maloney described to the Financial Times as a “substantial return” off its investment in MySQL, the maker of a popular open-source database program that was acquired by Sun Microsystems for $1 billion in 2008. (In 2009, Sun was acquired by Oracle.) As a result, the firm was able to assemble its fourth fund — which totaled £285 million ($430 million) — within two months, Maloney told the Financial Times.

The firm’s more recent big bets appear to be taking longer to exit, including Wonga, a controversial online financial startup that makes small, short-term cash advances to its customers and reportedly has been readying itself for an IPO in the U.S. market for roughly a year. It could fetch a valuation of $1 billion or more if it does, according to technology consultant Magister Advisors. Balderton is also a major backer of The Hut Group, an 8-year-old, British online retailer that has been rumored as an IPO candidate for the last couple of years.

Some of the firm’s more current exits have included the online betting exchange Betfair, healthcare services provider Circle Holdings and consumer payments services company Payzone, all of which have gone public in recent years, but have seen their share prices fall subsequently. For example, shares in Betfair have lost nearly half of their value since the company’s £1.4 billion ($2.15 billion) IPO in October 2010. —Constance Loizos

Institutional investors appear sold on the North of England, where Manchester-based Northedge Capital has eased to a £225 million ($351 million) final close for its debut fund.

About half of the commitments came from European investors, with 40% from the United States and 10% from Australia. In all, the lower mid-market fund comprises 15 LPs, including French insurer CNP Assurances, Australia’s MLC Investments and Providence, R.I.-based Pathway Capital Partners.

“Traditional PE houses in the U.K. are London-centric but we’ve got our core network here in the North and investors were convinced that we could get access to deals that others wouldn’t,” James Hall, a director at Northedge, told VCJ.

Northedge Capital Fund I will consider any sector except property and will invest from £5 million to £35 million ($7.8 million to $54 million); three deals have already been done and a fourth is nearing completion.

Having raised an early-stage fund in 2010, the firm has now gathered €40 million ($54 million) for ISAI Expansion, which is expected to reach a final close of €50 million ($66 million) in June.

“Growth capital guys in France don’t have a clue about the Internet so we thought it would be logical for us to be active there,” Jean-David Chamboredon, president of ISAI, told VCJ.

The majority of the new fund’s investors are French Web entrepreneurs, with some additional backing from French institutions, family offices and media corporations.

The fund will target profitable Internet businesses seeking expansion capital or owner buyouts, and will invest up to €5 million alone or €10 million ($6.5 million to $13 million) in syndicate deals.

Chamboredon says that only in “exceptional” circumstance would ISAI Expansion invest in the portfolio of the 2010 early-stage fund, which is now 50% committed.

Munich-based Afinum Management has become the latest in a string of German firms to close a mid-market fund this year after hitting its hard cap of €280 million ($367 million).

Fundraising took less than six months as investors from Europe and the United States again proved eager for exposure to the German-speaking mid-market.

“Investors are very interested in [Germany], but the number of funds is not increasing as investors avoid first-time funds. Competition is more driven by the number of experienced teams, not by the amount of money,” he told VCJ.

About two-thirds of investors in Afinum’s fourth buyout fund are from Germany and Switzerland; the rest hail mainly from the United Kingdom and United States.

Afinum is aiming for up to three investments per year over a five-year period.

But fellow London buyout house Permira didn’t even announce the long-awaited first close for its fifth fund, having raised €2.2 billion ($2.9 billion) of an original €6.5 billion ($8.5 billion) target after almost two years of fundraising.

From the Med to Moscow

Russo-Italian business ties are to be fostered by a new initiative from Luxembourg-based Arc Asset Management and a Russian government fund of venture funds.

The ISAM Fund is expected to support up to 30 small to medium enterprises (SMEs) with €2 million to €10 million ($2.6 million to $13 million) each and will focus on Italian companies that want to expand into Russia and Russian SMEs that hope to achieve the reverse.

Targeted at €100 million ($131 million), the fund is the creation of Arc AM and RVC Infrafund, the latter of which was established by Russian Venture Capital and SME Bank, a subsidiary of state-owned Vnesheconombank.

Despite such heavyweight financial support, however, the fund was launched with only “soft” commitments for €25 million ($33 million), an Arc spokeswoman said.

ISAM’s first investment should be announced before year-end, she added.