The writing has been on the wall for several years. Like the music and photography businesses before it, the financial services industry is being upended by technology. You can bet it will continue.

You can also bet that venture investors will continue to pour money into the space this year, despite frothy valuations and a less-than-cooperate exit market. No one believes the potential for big wins has gone away.

What’s changed is where the money is going. A shift is taking place from well-capitalized sectors, such as lending, to relatively untapped markets, such as insurance. And the irrationality that made fintech one of venture’s most richly valued sectors is easing. Pressure on valuations has accelerated in recent weeks and could continue for another year or two, with all but the top deals taking a big cut on pricing expectations.

“We are seeing new caution in 2016 across the board, including in fintech,” said Matt Harris, managing director at Bain Capital Ventures. “Late-stage valuations have pulled back, and there are surely fewer new ‘unicorns’ being created. At the early stage, ventures that are merely derivative of past successes are being viewed more skeptically, and investors are looking for fresh ideas.”

While the caution isn’t likely to derail enthusiasm for the sector, it could mean fewer dollars invested this year. Matching 2015’s post-bubble-year record of $5.5 billion going to U.S.-based startups, double the amount of 2014, will be hard.

So far, the size of the reduction is difficult to gauge. That’s because the opportunity to disrupt the industry is undiminished, as is the flow of young companies. Innovations, such as peer-to-peer computing, big data, cloud, mobile connectivity and digital currencies, are still poised to transform financial institutions, particularly less nimble mid-tier businesses with fewer resources to respond.

“We continue to see strong activity in companies coming up with innovative ideas,” said Jim Feuille, partner at Crosslink Capital. “I don’t see activity in this space slowing down at all.”

Underpinning this is the size of the financial sector, making up more than 8 percent of U.S. GDP with room for expansion. About a quarter of U.S. households are un-banked or under-banked, with the key millennial generation particularly distrustful of big financial institutions and hungry for digital solutions. Opportunities for disruption domestically and overseas seem practically unbounded.

This potential for disruption is reflected in the attitudes of financial executives. A recent PricewaterhouseCoopers study reported that execs at fund transfer and payment companies fear they could lose as much as 28 percent of their business in the next five years, while bankers see themselves losing almost a quarter.

Another positive sign for investors is that financial institutions appear increasingly willing to partner with innovative startups, rather than simply ignore them. This opens the door to both infrastructure sales and go-to-market partnerships that might not have been possible a few years ago.

“Fintech is becoming far more embedded in the traditional ways of doing business,” said David Buerger, co-founder of CUneXus Solutions, which helps credit unions compete with LendingClub. “I think this new normal will set in in the next 18 months.”

None of this is lost on investors, such as Revolution Ventures Managing Partner David Golden.

“I believe we’re in the second or third innings of creative innovation in fintech,” Golden said. “I believe it will continue. The opportunity set is so large.”

However, valuations are already under pressure, and non-venture investors such as hedge and mutual funds are backing away from the market. Looking ahead, C and D rounds will have to come from the checkbooks of VCs with less help from outside capital.

“The valuations are going to get normalized,” said Ravi Viswanathan, general partner at New Enterprise Associates. “There is, for sure, a softening of the pace.

Big fundings in the space continue, for sure. Betterment raised new money this year. So did Affirm, OpenDoor Labs and Aria Systems. But privately more investors seem to question big uprounds, especially in ultimately low-margin businesses.

Another key challenge for investors is today’s exit markets. Shares of LendingClub have slid well below their IPO price, and while Square’s stock is above its, the issue hasn’t been a rocket ship. Elevate Credit’s offering still struggles to get out.

On the other hand, lower startup prices could spark M&A, giving some encouragement to investors.

“The sector is still attracting some of the best entrepreneurial talent,” said Bain’s Harris. “The multi-decade theme of technology-led solutions, augmenting or replacing traditional financial institutions in various segments of the financial services landscape, is still alive and well.”

Image design of business people looking by Janet Yuen for VCJ, based on ©iStock.com/ferrantraite 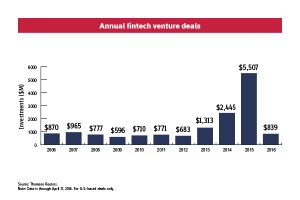 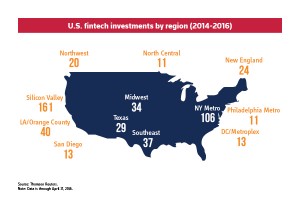