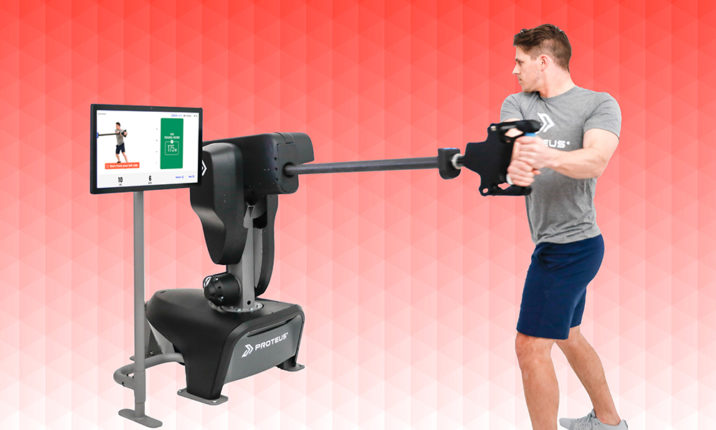 Fitness tech has grown in popularity in recent years as companies like Peloton, Tonal and Whoop make advancements in fitness data collection and change the way we look at and engage in our health and fitness. According to a report by Straits Research, the wearable fitness tracker market alone was valued at $45 billion in 2021.

While companies like Whoop allow users to track resting heart rate, respiratory rate and a variety of other bodily metrics, measuring strength and power still relies on subjects performing straight-line exercises like the bench press and squat.

Proteus Motion, which just raised $8.5 million in its first Series A round, aims to change that. It already has the support of some big names in professional sports, including financial backing from the company that owns the Philadelphia 76ers and New Jersey Devils and individual athletes from the NBA, PGA and MLB.

“Gyms look very similar to how they did 20, 30, 40 years ago. Our education has expanded but the tools are still limited. A lot of the market is focusing on wearable stuff, which is great, but there’s huge voids that stem from the equipment,” Proteus founder and CEO Sam Miller told Venture Capital Journal.

“We want to own the category of strength from a measurement standpoint. We see all these pillars, $30 billion to $75 billion industries per category, body composition and imaging, sleep and recovery. Strength is a huge open field that we’re going to own. That’s the opportunity that we see, and it’s around that strength measurement that we uniquely can do.”

Building on an idea that his father created and prototyped in the 90s, Miller and the Proteus team have created a machine that provides resistance in three dimensions without inertia and free from the effects of gravity. Using magnets, Proteus Motion’s patented design unlocks the ability to measure strength in ways previously impossible.

“It’s like nothing you’ve ever experienced before,” said Miller. “When you’re using Proteus, it feels like you’re moving through a fluid that you can change the viscosity of. It is hardware that is adapting to you and your movement uniquely, versus you adapting your movement to equipment.”

As deal numbers decrease in the fitness tech industry, more established companies are facing their own share of setbacks. Peloton has laid off more than 3,000 employees this year, and Tonal recently announced a 35 percent reduction in its workforce of roughly 750. Both companies attributed the layoffs to a variety of factors, including inflation, the looming possibility of a recession and changing consumer habits. Peloton and Tonal, both primarily direct-to-consumer home fitness products, grew quickly due to the lockdowns during the pandemic. Proteus, on the other hand, employs a mostly B2B model, selling its product to physical therapy clinics, sports teams and established athletic trainers.

“In our lifetime there hasn’t been any real innovation in the fitness tools we have other than variable resistance,” said HBSE Ventures co-founder and general partner Brad Farkas. “This is fundamentally different and more capable in both range of exercises and efficiency.”

Proteus has made some lofty claims about its technology. It said clinical research studies conducted with the Hospital for Special Surgery in New York found its system produced 95 percent greater peak muscle activation than a cable machine or free weight. Additionally, Proteus activated target muscles throughout 85 percent more of an exercise’s range of motion than a cable machine or free weight, the company said.

The Hospital for Special Surgery, which is an investor in the company, uses Proteus in conjunction with motion capture cameras in its Motion Analysis Laboratory to create full musculoskeletal assessments for patients.

As for its latest VC round, the company plans to stay the course, primarily focusing on sports performance, sports medicine and physical therapy applications, Miller said. Despite spending nothing on advertising, Proteus is already in use across 43 states with more than 150 units delivered. The machine is used by a number of high-profile trainers and athletes, including Bobby Stroupe, who trains Kansas City Chiefs quarterback Patrick Mahomes, and Spencer Tatum, who trains pro golfer Jon Rahm.

Miller said Proteus does have a small number of pilot programs at commercial gyms, with up to 1,000 monthly sessions done at some locations, but for now the company is planning on “continuing to focus on businesses that provide services to competitive athletes at every level, as well as a big expansion into golf performance and golf training sites.”

Alongside its funding announcement, Proteus appointed longtime adviser Paul Byrne to its board of directors. Byrne served as the president of fitness equipment manufacturer Precor from 2000-2012 and is credited with introducing the Elliptical trainer to the fitness industry.

“I think Proteus is a real breakthrough,” Byrne told VCJ. “These amazing insights that they’re gaining, we’ve never been able to measure this kind of thing before. For therapists and trainers to have that kind of data to design better programming, achieve better outcomes, for it to be more personalized, more efficient, it’s a combination of a great breakthrough product with amazing software.”

Miller has meticulously researched every aspect of Proteus, from its intricate data collection capabilities down to its name. Armed with dual bachelor’s degrees in economics and history from Vanderbilt University, along with some graduate level study in architecture and design at Harvard, Miller said, “I wanted to find a name that had a historical significance and gravitated toward ancient Greek history, because in many ways what the Greeks were doing provided the foundation for modern day exercise. Proteus is a demigod, a son of Poseidon, and the root of Proteus means adaptable and fluid, so these connotations around water just encapsulated what we do.”