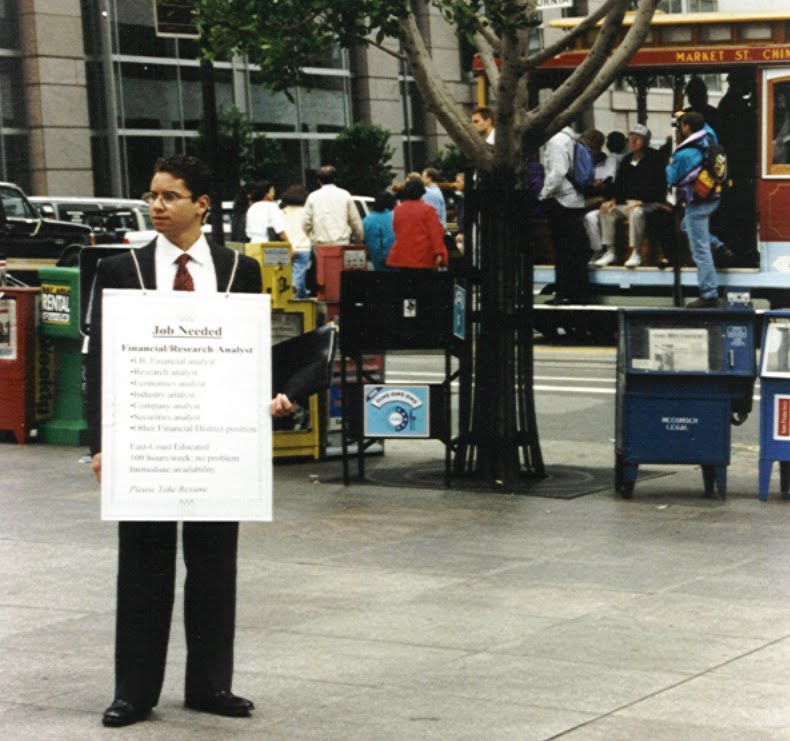 Steve Schimmel was born into poverty in suburban Chicago, yet by age 32, he was able to retire, having been made unfathomably rich by the initial public offering of Google, where he was employee no. 13. (An analyst by training, Schimmel didn’t have a specific job description at Google but says he instead got to be a “business development renaissance man.”)

Last week, Schimmel wrote of his compelling rags-to-riches story in a widely read blog post. Last night, I asked him if we could talk more about his experience of become suddenly wealthy and what advice he could share with the tens, if not hundreds, of Facebook employees who will surely enjoy the same life-altering event, likely next year.

Schimmel, who is currently writing a novel and “working on a business plan to change the way Hollywood does business,” shared some thoughts with me just now.

When did you realize that you were going to be rich?

About a year before [Google’s] IPO, even though the internal stock price was relatively low, it had increased to the point I had enough shares to be a millionaire on paper. However, there was no indication of when or even if a liquidity event would occur. In April 2004, based on SEC regulations, Google had reached a point where it would have to either file its numbers publicly as a private company or file an S1 to go public. It was the day that the decision had to be reached and Google announced it was going to go public that I came to the realization that I would be wealthy.

Was it something that people at Google talked about, or were employees afraid to discuss how their respective new wealth might compared with that of others?

Early employees all knew each other very well and knew who started early enough to have enough shares to become millionaires. There definitely were closed door conversations amongst ourselves. I never saw anyone flaunting the fact or being disrespectful to those who had joined later and would not be in that group.

So it wasn’t immediately apparent that there was a hierarchy between those who’d come early and received a lot of options and those who came later and didn’t enjoy as much equity upside?

Unfortunately, I am not the best one to ask about this. I had announced my intent to leave the company very soon after we filed to go public. I was not in the office enough after the announcement to get a feel for that situation.

Was there a mass exodus?

There was no mass exodus for early Googlers. There was a sincere admiration and appreciation for the company we had all helped build, [and] Googlers who felt they could continue to make a significant impact at the company stayed. Those who felt their best contributions to the company were behind them left. There were a lot of risk-taking start-up people at Google. By the time we IPO’d, we were no longer a start-up. The fit for a lot of people, such as myself, just wasn’t there anymore.

When did you start cashing out your shares?

As 100 percent of my net worth was in Google shares and having gone to school for finance and investments, I knew that I needed to diversify. I began selling shares in blocks as soon as the lock-up ended.

Did Google direct employees to money managers or was the onus on you to find someone? Either way, do you have advice on the process?

Google was very proactive in making money managers available for employees. I remember interviewing a few of them at our office. The company also brought in amazing speakers to talk about money management. My biggest recommendation to the newly wealthy is to meet with at least three managers who deal with portfolios of your size and if you can get any referrals from wealthy people you trust, go with that. I definitely met with some sharks who smelled blood in the water.

What about estate attorneys?

Again, I took a referral from a wealthy friend. As for estate planning, I highly recommend paying a premium to go with an experienced company that deals in estates the size of the one you now have. Do it right away unless you really enjoy giving money to the government.

Did you come to view politics differently?

No, though I would say that after you pay a certain amount of taxes, [you might wish you] could elect to self-direct some of it instead of it going into the general coffers.

I hate to perpetuate an obnoxious stereotype, but I have to ask: was family or friends an issue for you or anyone you know?

I’d say that the fear or expectation that family and friends are going to come out of the woodwork to ask for money is way worse than the reality. My only advice is not to give out of guilt or a false sense of obligation. Nobody wants to be in a relationship where your only value is the ability to always pick up the check.

Both Google and Facebook are companies whose growth trajectory looks to move in one direction for a long time to come. Any advice for Facebook employees regarding when to diversify and to what degree to diversify?

Having been a stock analyst, I was very aware of the fickle nature of the investing community. I read all of the analyst reports and really felt that nobody had a clue how to properly value the company. Even though I had full faith in the company and its ability to grow, it couldn’t predict what metrics were going to be used to value the company or what would happen when our growth inevitably slowed down.

Since I felt that analysts and investors didn’t really “get” Google, I knew it was going to be a bumpy ride for the stock whenever any information came out that they didn’t immediately know how to interpret. Ultimately in my experience, high growth tends to equal high volatility. Watching your net worth jump wildly day to day is not a way to stay happy and sane.

My best advice is to decide if what you have is “enough” for you. There is an old saying that “nobody ever went broke taking a profit.” Every share you hold on to may go down. What I did was sell a substantial amount early and as the price went up, I sold in blocks. I kept a percentage for the long haul to ride the upside. If I lose these remaining shares, my lifestyle won’t change.

Have any advice on where to park the other assets?

First, get a great money manager. Then I recommend rewarding yourself for the success you have achieved. Buy a nice house and car. Maybe even fly private a few times. I am a fan of solid portfolio management. Be smart. Once you’ve made it and are used to a certain lifestyle, you won’t want to go backwards. If you have enough money to not be in debt, don’t be in debt.

A lot of ex-Googlers have started companies or made investments in ex-Googler’s startups. I imagine the same with be true of Facebook. Have you been approached to invest and do you have advice on how to handle these requests?

I haven’t backed any startups yet, but I’m right in the process of starting look for investing and advisory opportunities. I’m relying on my old Google friends for insight and ideas, [but] there are plenty of resources for Bay Area angel investors. Seek them out.

Has there been any downside to becoming so wealthy at such a young age?

Becoming wealthy early, regardless of how long you have believed it would happen, is a shock to the system. There is even a phrase I’ve heard called “sudden wealth syndrome.” Most problems don’t just go away with money and, while it’s extremely cliche, money doesn’t buy happiness.

An amazingly difficult question to answer that is nearly impossible to relate to unless you are in the situation is: “If I could do anything in the world, what would it be?” If you are young, driven and passionate, it’s not going to be to sit around and play golf all day.