If there’s one thing you learn quickly in the journalism business, it’s that readers love lists. When I got my start at the San Jose Business Journal, I had a colleague named Dan whose entire job was creating lists. He produced a new one every week. Car dealers, accounting firms, banks, developers, software makers, credit unions, law firms. Dan had a list for just about any industry you could think of. At the end of the year, he bundled them all together into one giant book, which was called (you guessed it) The Book of Lists. 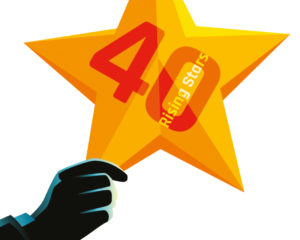 I’ve been thinking of Dan because Venture Capital Journal will soon produce its fourth annual list of 40 Rising Stars in the venture business. It is by far our most popular feature, with tens of thousands of pageviews.

Stars on our previous lists continue their rapid ascent:

If you have a friend or colleague under the age of 40 who has accomplished something notable in the past 12 months, please tell us about them. What qualifies as notable? It is up to you to make that call. People on our previous lists were nominated for a variety of reasons, including earning a promotion, playing a pivotal role in a big deal, leading diversity efforts and starting their own firm.

Our list is biased toward people who work at venture capital firms, either as investors, IR professionals or in operations. But we are also seeking nominations for stars at LPs as well as advisory firms and service providers that serve VC clients, such as law firms, fund administrators, placement agents and banks. (Sorry, but entrepreneurs aren’t up for consideration.)

A couple of caveats: nominees must be under the age of 40 as of January 1, 2023, and they cannot have appeared on any of our prior lists of Rising Stars.

You can see our previous lists here:

For all the details on the submission process, go here. (If you still have questions, email me at laragon@buyoutsinsider.com.)

Once we get all the nominations, my colleagues and I will pore over them and make the call on who will make the final cut.

The deadline for submissions is November 1, so please make your nominations as soon as possible.

Good luck to your nominees!