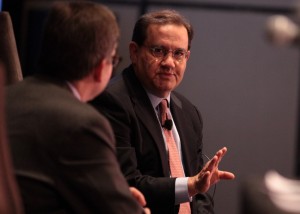 UTIMCO chief: We missed the first internet wave, but made it for the second

The University of Texas Investment Management Company (UTIMCO) isn’t listed on public filings as a large shareholder in Twitter. But through its stakes in Twitter backers, in particular early-stage investors Union Square Ventures and Spark Capital, the endowment is one of the largest indirect holders of the company’s stock.

That was one of highest-return venture investments disclosed by UTIMCO’s Bruce Zimmerman at March’s PartnerConnect conference in New York City. Zimmerman, who serves as UTIMCO’s CEO and CIO, told conference attendees that the endowment made a big push in the 2000s to build out its venture portfolio, after being underweight in the 1990s.

“My colleagues realized that UTIMCO missed the first round of venture investing in the ’90s, so we’re not in the Kleiners and the Sequoias,” he said.

At the time the endowment started to bulk up, Internet 2.0 and social media were hot investment themes, so staffers focused on finding up-and-coming managers with expertise in those sectors.

The endowment made bets in the middle of the last decade on such emerging firms as Union Square, Spark and Foundry Group. Funds from these firms remain its top performers. As of August, UTIMCO, one of the three largest endowments nationwide, had positions in 26 venture and growth funds with vintages of 2003 to 2007. At that time, 23 of them had IRRs in positive territory and three had IRRs that were negative, according to UTIMCO records.

Zimmerman said having early relationships with these up-and-coming VCs should have future payoffs as well, as UTIMCO invests in their follow-on funds.

For now, it’s clear that UTIMCO plans to keep up with the star VCs it backs — and has the endurance to stick it out.

For Lindel Eakman, UTIMCO’s managing director of private markets investments, Zimmerman said that job dedication extends to going jogging with the partners at Foundry Group. Considering that Foundry Partner Brad Feld is known for running marathons, it’s not an outing for the faint of heart.