When cloud communications company Twilio went IPO in late June, its stock surged as much as 72 percent on the day of the launch, raising hopes that investor appetite for U.S. tech IPOs is finally returning.

Twilio’s strong debut valued the company at as much as $2.12 billion and was the first offering from a tech unicorn this year.

But it was also only the third IPO by a VC-backed tech company in the first half of 2016.

The aftermarket performance of the IPOs has been a mixed bag.

Clinical-stage gene therapy company AveXis, which went public in February, was trading 90 percent above its offering price, as of the end of June.

Biopharmaceutical company Proteostasis Therapeutics, which went out one day after AveXis, was also maintaining a strong stock, as it was trading 52 percent above its IPO share price, as of June 30.

However, Aeglea BioTherapeutics, which develops therapeutic enzymes for oncology treatment, was down 51 percent, making it the lowest performing company to debut this year.

Still, analysts have said a successful debut by Twilio may help stimulate offerings by other tech companies, including the “unicorns,” which have a valuation of at least $1 billion. Already, AppDynamics said it is pushing ahead with its IPO plans.

But no others came forward to publicly declare their IPO plans in July. Maybe after summer.

“(This year) has really been an arid desert in new issuance and equity. I’m encouraged that the success here will spawn other IPOs,” Jack Ablin, chief investment officer of BMO Private Bank told Reuters. 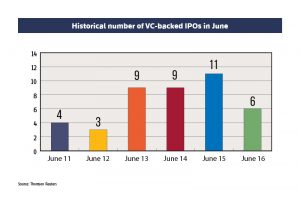 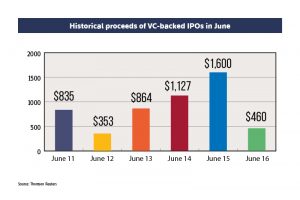