But that hasn’t stopped biotech companies from launching public offerings. In fact, that’s all there has been.

What’s more, all six of the quarter’s offerings were biotech. Also, Q1 marks the first time that no venture-backed tech companies listed publicly since the first quarter of 2009. Five of the companies are U.S.-based, led by Cambridge, Massachusetts-based Editas Medicine (Nasdaq: EDIT), which raised about $110 million in its February debut.

The  largest overall IPO of the quarter was Beijing, China-based BeiGene Ltd (Nasdaq: BGNE), which raised more than $180 million in its February IPO.

However, as of the end of March, it was Editas that was performing the best of all new 2016 IPOs, according to a VCJ analysis. The company debuted its stock price at $16 a share, and that reached $34.54 on March 31 for an 116 percent gain.

In addition to the six biotech stocks that went public in Q1, another life sciences company also went public in early April: Aeglea Bio Therapeutics Inc. The Austin, Texas-based company had raised about $55 million in funding from Lilly Ventures, Novartis Venture Funds, OrbiMed Advisors and others. 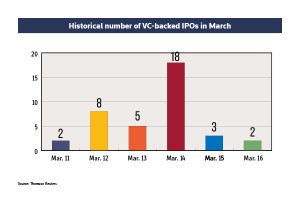 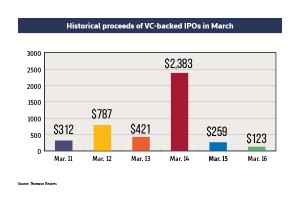 Photo of a screen displays the Dow Jones Industrial Average on the floor of the NYSE on Jan. 7, 2016 courtesy of Reuters/Brendan McDermid