Mobile payments company Square dominated the VC-backed IPO landscape in November, even though the San Francisco-based company went out at a heavily discounted price.

Square, which went public on Nov. 19, priced its IPO shares at $9, about 25 percent less than it had hoped, as it struggled to win over investors skeptical about its business and high-priced valuation.

Square had previously set a price range of $11 to $13 per share, well below the $15.46 investors paid in Square’s most recent private financing round last year.

The discounted $9 per share price puts Square’s market capitalization at $2.9 billion, less than half of its $6 billion valuation it had received from investors.

“The way that Square was valued as a private company is they were just going to disrupt everything and change payments,” Andrew Chanin, CEO of PureFunds, an exchange-traded fund that includes mobile payments companies, told Reuters. “And the reality is not that.”

Although the Square IPO is seen as an indicator that soaring valuations of private tech companies can be fleeting, the company’s share price reached $12.04 at the end of November, nearly 34 percent higher than its debut price, according to a VCJ analysis of venture-backed IPO aftermarket. The share price was still hovering at about $12 in early December.

The company had raised more than $500 million from investors, including GGV Capital, Khosla Ventures, First Round, Tiger Global Management, Citi Ventures, Sapphire Ventures, Goldman Sachs, Sequoia Capital and others, according to data from Thomson Reuters.

Square was one of five VC-backed IPOs to debut in November. Although venture-backed biotech and healthcare companies have dominated the IPO market throughout the year, only two of the five new publicly traded companies that came out in the month were in biotech, perhaps an indicator that the parade of life science IPOs is slowing.

Year-to-date through the end of November, 53 of the 71 VC-backed IPOs, or 75 percent, have been in life sciences or healthcare-related fields, according to a VCJ analysis of the market.

Waiting to go IPO next, VCJ found a mix of tech and biotech companies in registration, according to the Thomson Reuters database. With Sydney-based enterprise software company Atlassian Pty Ltd going out in early December, it’s likely that will be the last VC-backed tech IPO of 2015.

Others in registration include:

Photo: Jack Dorsey, CEO of Square and CEO of Twitter, uses his phone to live cast during an event outside of the NYSE to celebrate the IPO of Square in New York, Nov. 19, 2015. REUTERS/Lucas Jackson 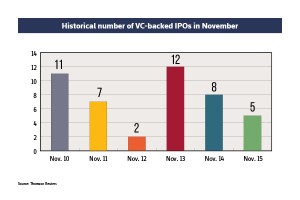 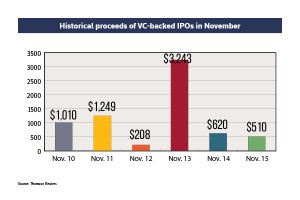