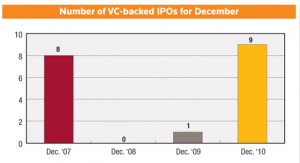 The IPO market ended last year with a bang and started this one with a whimper.

A total of nine venture-backed companies went public on U.S. exchanges in December, raising just under $1.3 billion, according to Thomson Reuters (publisher of VCJ). That made it one of the stronger months in a year of improving fortunes for the VC-funded IPO market, which posted a respectable rebound in 2010 after a marked slowdown in the prior two years.

Yet the momentum didn’t carry straightaway into the New Year. During the first three weeks of January, there were no IPOs of venture-backed companies. Over the same period, just two VC-funded companies registered to go public: Wi-Fi provider Boingo Wireless and China-based power management semiconductor products maker BCD Semiconductor Manufacturing.

Boingo Wireless filed to raise up to $75 million in an IPO on Nasdaq, under the ticker symbol WIFI. BCD Semiconductor Manufacturing filed to raise $69 million.

Given that the start of the year is commonly a slow period for new offering activity, however, IPO market watchers saw considerable potential for a near-term pickup in activity.

“With nearly 120 firms currently in active registration status, 2011 is shaping up to become a busy year for IPOs,” wrote analysts at Renaissance Capital.

In addition to companies already in registration, Renaissance says excitement is also building around still-private companies in the social networking space, such as Facebook, Groupon, LinkedIn and Zynga Game Network, which have been exploring the possibility of going public.

Judging from recent market activity, however, the most likely social networking giant to go public on a U.S. exchange could be located on the opposite side of the Pacific Ocean from Silicon Valley.

Just behind the e-commerce company was Youku.com, the “YouTube of China,” which raised $203 million in its IPO the same day. Its venture investors include Brookside Capital Partners (17% stake), Sutter Hill Funds (12%), Maverick Funds (11%) and Farallon Funds (11%).

As those companies made it out, new ones filed to take their place on the IPO waiting list. A total of four venture-backed companies filed to go public on U.S. exchanges in December, including:

Responsys, a San Bruno, Calif.-based developer of an online direct marketing platform, is looking to raise $60 million in an IPO. Shareholders include Foundation Capital (20%), Sigma Partners (19%), Accel Partners (17%), Redpoint Ventures (11%) and The Entrepreneurs’ Fund (8.4%). The company raised $57 million from venture investors between 1998 and 2003, according to Thomson Reuters.

Sagent Pharmaceuticals, a Schaumburg, Ill.-based provider of injectable therapies, is seeking to raise $100 million. Vivo Ventures owns a 43% stake in the company.

Fluidigm, a South San Francisco, Calif.-based of microfluidic systems for the agriculture and biotechnology industries, is seeking to raise $86 million through an offering on Nasdaq. Shareholders include Alloy Ventures (5%), EuclidSR Partners (7%), Versant Ventures (8%) and the Singapore government (14%). The company previously raised $216 million in venture funding between 1999 and 2009.