In relative terms, Massachusetts and New England had a good year of investing last year.

Across the country, venture investments were down 20 percent as VCs rethought late-stage valuations and shifted attention to early-stage transactions.

But investing in Massachusetts was off only 15.8 percent in dollars, giving the state its second best year since 2000, according to data from Thomson Reuters. (The best year since 2000 was 2015.) And deal diversity was surprisingly balanced between healthcare and technology.

Across New England, dollars going to work were down a slightly more dramatic 17.7 percent.

Venture dollars going to Massachusetts startups added up to $5.7 billion in 2016, off from $6.8 billion a year earlier, according to the Thomson Reuters data. Deals done added up to 448, down 17 percent year over year. 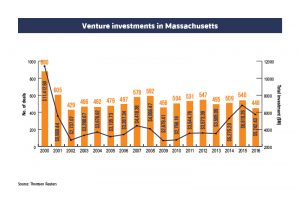 Download Data in Excel: Venture investments in Massachusetts by year