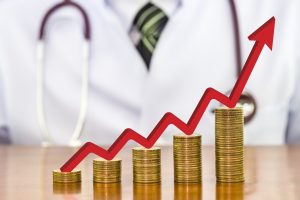 Whether the subsequent controversy surrounding Outcome Health will impact this year’s deal making is yet unknown.

The region witnessed a 43 percent jump in healthcare investing in 2017, according to BioEnterprise, with a total of $2.5 billion pumped into healthcare startups in 11 Midwest states. Almost half of it was earmarked for digital health, and for the first time digital health overtook biotech and drug development in dollars put to work, according to BioEnterprise. Investments in the healthcare software and services sector added up to $1.2 billion.

The year received a substantial boost from the $500 million Outcome Health funding in May, with controversy erupting at the company several months later over claims it falsified data. Investors Goldman Sachs and CapitalG filed suit, but dropped their action in a settlement early in 2018 that saw the company’s co-founders remove themselves from day-to-day operations.

Without the Outcome Health deal, investment growth would have been 14 percent in the region, or similar to the increase seen in 2016.

Not surprising, Illinois, where Outcome Health is based, was the top state for money dispersed. But healthcare investments rose a substantial 73 percent in Ohio, 83 percent in Michigan and 32 percent in Minnesota. Activity was strong in Western Pennsylvania as well.

For the year, healthcare deal volume was off 3 percent, a reversal from 2016, when the deal count rose.

Action Item: To access the BioEnterprise report, go to https://www.bioenterprise.com/2017-2/