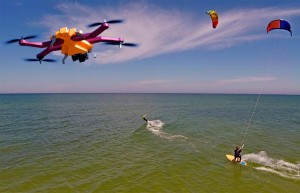 David Weekly represents a new generation of seed investor. He’s young, smart, hyper-connected, and has access to some of the very best deals in Silicon Valley.

But these days, there is only one place he’s putting his money. In drones.

In fact, Weekly is so enamored with drone technology, he launched his very own funding syndicate, drone.vc, which plans to invest up to $250,000 per deal in five to 10 drone-related startups every year.

“I truly believe this is the next great investment category,” Weekly said.

Weekly, who previously founded Hacker Dojo and co-founded Mexican.vc, first started playing with drones as an amateur hobbyist. But it’s the commercial, not recreational, applications of drone technology that have Weekly and other investors so excited.

Amazon founder Jeff Bezos made a huge splash last year when he announced that drones will one day be buzzing across the skies delivering packages directly to consumers. But that’s just one of many potential applications.

The oil and gas industry is already experimenting with drone technology to monitor off-shore oil rigs. Farmers want to use drones to survey their fields and collect data on crop health. Even real estate agents could use drones to capture panoramic pictures of the properties they sell.

One of drone.vc’s first investments is a precision flight company called PreNav that enables drones to fly at low altitude, in and around structures without hitting obstacles.

The commercial drone market is still so nascent, and the potential applications so limitless, that few are ready to forecast the market. But suffice it to say, it’s huge. Perhaps the best guess comes from research firm BI Intelligence, which believes that 12 percent of an estimated $98 billion in global spending on aerial drones over the next decade will be for commercial purposes.

“We look for very disruptive technologies in very large markets with great teams, and there is nothing right now that has more appeal in terms of disruption and promise than commercial drones,” said Diane Fraiman, a venture partner at Voyager Capital, which recently completed its first drone deal.

Voyager led a $1.5 million investment in SkyWard, a Portland, Oregon-based company that has developed a software management system for the dispatching, tracking and logging of commercial drone flights.

“Just think about the Amazon vision of delivering packages via unmanned aerial drones,” Fraiman said. “They can’t put those robots in the sky and start delivering into neighborhoods if they don’t have the pathways to follow.”

While recreational drone flights are mostly legal in the United States, the use of drones for commercial or business purposes has not yet received clearance from the Federal Aviation Administration. What’s more, the perception of drones by people in the United States is still largely negative, with much of the population associating drones with wartime activities, the invasion of their personal privacy, such as Big Brother-like surveillance.

“No question, the biggest challenge for drone technology is an uncertain regulatory environment,” said Christina Gagnier, a partner at the law firm Gagnier Margossian LLP, and a candidate for California’s 35th congressional district.

She said that the FAA is scheduled to establish rules for the operation of unmanned aerial vehicles by September 2015, but she added that it is uncertain if the agency will meet this timeline.

One company undeterred is AirDog, a Palo Alto, California-based company that has developed technology that is ideal for use by extreme athletes who want to film themselves while snowboarding, surfing or mountain biking. Mounted with a GoPro camera, the AirDog drone can follow the user at speeds of up to 40 miles per hour and keep that person perfectly centered in the frame while capturing video.

“Our system is focused on the recreational use of drones, and that is perfectly legal in the U.S.” said Agris Kipurs, co-founder of AirDog. “I can’t see the FAA banning drone usage on a lonely beach and not allowing surfers to use AirDog to capture footage of themselves.”

Voyager’s Fraiman is confident that the federal government will ultimately allow the commercial use of drones, but she believes it will be more of a bottom-up effort.

Case in point is in San Jose, California. The city’s police department recently purchased a drone and said it does not need federal authorization to fly it.

Weekly is another investor who isn’t put off by the regulatory uncertainty.

“I’m making my bet that this technology is useful enough to the American people and the American economy that ultimately it will find a way to be legalized,” he said.

This story first appeared in affiliate magazine Venture Capital Journal, which is published by Buyouts Insider. Subscribers can read the full story, which includes an accompanying table of drone deals, by clicking here. To subscribe to VCJ, click here for the Marketplace.

Photo of an auto-follow drone courtesy of the drone maker AirDog.