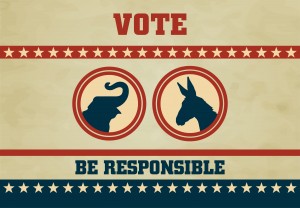 We are getting close to that cold winter night on Feb. 1 when Iowans will caucus for their presidential candidate of choice, setting in motion the cross-country voting marathon that will determine the candidates who will be placed before the American voters next November. As the race to select our next commander in chief reaches a fevered pitch, it’s important to explain how we view NVCA’s role in the 2016 presidential sweepstakes.

As has always been the case throughout our 40-plus year history, NVCA does not endorse or actively campaign for individual candidates running in the primary or general election for either party. However, that’s not to say we sit by on the sidelines letting history play out before our eyes without engaging in the most consequential choice our country makes every four years.

What we have been doing and what we will continue to do is make sure there is a conversation about what is important to the entrepreneurial ecosystem. In other words, we want to inject ourselves into the presidential campaign so there is a robust debate on the issues that we believe will define our future success. The U.S. entrepreneurial ecosystem is the crown jewel of our economy, but like all things, it requires attention and care to keep it strong and growing.

What we find is that policymakers and candidates for public office at all levels of government take for granted that we will continue to have a monopoly on innovation. Public officials from around the world look towards our innovation economy as a model to replicate in their own countries and are working day and night to supplant our dominance. If appropriate action isn’t taken on a whole host of issues, we run the risk of shooting ourselves in the foot and sacrificing our role as the world’s leader in innovation.

Take for instance the issue of immigration reform. Elected officials of all stripes have long agreed that it’s in our best interest to make it easier for high-skilled, foreign-born entrepreneurs to build and grow great companies in the U.S. Unfortunately, due to the politics surrounding the more controversial aspects of immigration reform, the commonsense, non-controversial changes necessary to help strengthen our entrepreneurial ecosystem fall victim to political gamesmanship. What we will do in 2016 is make sure our presidential candidates understand how important it is for the future success of the ecosystem to proceed once and for all on much needed immigration reform measures.

Another area in which commonsense reforms can go a long way in strengthening the entrepreneurial ecosystem is to make the government procurement and acquisition process more accessible to newer companies that are developing innovative solutions, particularly in the cybersecurity space. Often, the process to secure a government contract can take two to three years, and although the potential for scale and impact by working with the government is significant, the sales cycle with the government is too cumbersome and lengthy for startups. As Ted Schlein of Kleiner Perkins Caufield & Byers aptly pointed out at a recent briefing NVCA organized on Capitol Hill, “Changes need to be made so that buying a piece of software is not the same as buying an aircraft carrier.”

Finally, I’d be remiss if I didn’t mention how critical it is that we remind all presidential candidates how important it is that we commit ourselves to the advancement of medical innovation through the adoption of modern approaches to development, regulation and reimbursement policies. To continue down our current path where we focus only on costs without regard for the expenses incurred through the development process could have the unintended consequence of drying up innovation, threatening not just the entrepreneurial ecosystem but the health and wellbeing of our citizens.

These are just a few of the many issues NVCA will shine a spotlight on during the 2016 presidential contest. Much needed tax reform that includes provisions to increase the development of new startup formation will, of course, be a central component of our efforts. As will a discussion around the need for further reforms to our public markets so that we can improve the ability of new companies to gain entry and effectively use them.

When all is said and done, we are hopeful that whoever takes the oath of office next January will have a better appreciation for the important role the entrepreneurial ecosystem plays in our economy and the steps we need to take to make sure it continues to prosper.

Bobby Franklin is president and CEO of the National Venture Capital Association (NVCA).