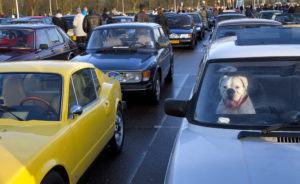 Over the past couple of years, at least half a dozen parking-focused startups have raised seed or venture rounds totaling more than $60 million. In July alone, two—ParkWhiz and Streetline—closed rounds of $10 million each. And incubators continue to churn out new entrants pitching new way to eliminate the much-hated practice of circling around for parking.

It may look like a crowded playing field, but entrepreneurs and their backers also see enormous opportunity. Parking represents “one of the great unsolved urban problems,” according to Manny Krakaris, CFO of Streetline.

But to date, street parking has been a pretty low-tech activity, with almost all drivers relying on nothing more than their eyeballs to find a spot. Streetline is looking to change that with a real-time parking app that collects sensor data from spaces to locate available spots.

ParkWhiz estimates that parking is a $30 billion market in the United States alone, citing data from the International Parking Institute. The Chicago-based company currently is operating in 125 cities, offering an app for people to find and pay for parking. To date, more than a million people have used its service.

There are several ways startups are maneuvering in the parking space. One attribute shared by the majority of venture-backed players is a smartphone app for reserving and paying for parking.

Some newer services are getting even more creative. MoneyParking, ParkModo and Sweetch, three startups that launched in San Francisco and other cities, have stirred up controversy over their unusual approach to dealing with parking scarcity.

Their apps connect drivers looking for a parking spot with people about to leave their space. To secure the space, drivers can bid to pay the person leaving to hold the space for them. For now, however, the services are at least temporarily disabled in San Francisco, after the city issued a cease and desist order.

Correction: An earlier version of this story had an incorrect byline. Joanna Glasner is the correct reporter.