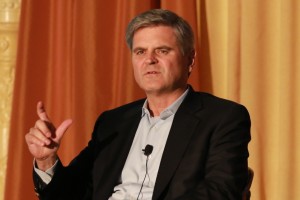 Revolution Growth, the growth venture fund co-founded by former AOL chief Steve Case, seems to have its pedal to the metal these days. In fact, the Washington, D.C.-based firm has made three of its six investments to date in the last two months alone.

The biggest of those investments – and the firm’s biggest deal to date – is a $40 million investment being announced this morning. The recipient: BigCommerce, a 4-year-old e-commerce company.

Austin-based BigCommerce is already a sizable and profitable business. More than 35,000 small and medium-size companies pay at least $25 a month for its software-as-a-service platform, which enables those customers to quickly create an online store, market their businesses, build their brand and sell their goods. The big idea behind BigCommerce to give any size business the same e-commerce capabilities as Amazon enjoys.

Revolution believes BigCommerce could eventually have millions of subscribers, which is apparently why it elbowed at least one of the company’s earlier investors out of the round.

General Catalyst Partners, which introduced Revolution to BigCommerce, didn’t necessarily want the company to raise more capital without its involvement, either, says Case. But to “justify the time” that Case plans to spend with the company, he says he asked General Catalyst to “stand aside” so Revolution could invest “the larger stake.” Case says he plans to help BigCommerce strike partnerships with “players who already have a payment relationship or software relationship” with business customers and can “add e-commerce to their bag of tricks.”

The move appears to be part of Revolution’s own e-commerce buying spree.

In June, the firm led a $20 million investment in Lolly Wolly Doodle, a children’s clothing maker based in Lexington, N.C., that largely relies on Facebook to reach and sell to its customers.

Last week, Revolution announced another big investment: $20 million for Optoro, a Lanham, Md.-based software platform that helps retailers sell inventory that customers have returned and that raised $23.5 million altogether through the round, which included Grotech Ventures.

Asked whether the flurry of recent bets means Revolution might be preparing to raise another growth fund next year, Case says the firm is “still very much focused on investing” its current fund. (Case and co-founder Ted Leonsis contributed $75 million of their own capital to the current fund.)

Case adds that as a native of Hawaii, he subscribes to “wave theory,” saying that “sometimes, the waves are there” and sometimes, when you can’t get the deal at the valuation that you want, you just have to wait for the next one.

“We’re patient,” he says. “We know waiting for that right wave makes sense.”

(Corrections: This piece originally stated that Revolution Growth is based in Vienna, Va.; it’s situated in Washington, D.C. Further, though Steve Case is joining the board of BigCommerce, he is not becoming its chairman, as was originally reported.)