Growth-stage investor Sapphire Ventures has brought in outside LPs for the first time for its main fund and has announced it has raised $1.4 billion in commitments for Fund IV and an opportunity fund.

The firm previously raised $1 billion for its third fund in 2016 when the German software company SAP SE was its sole backer.

But the firm has raised its latest main vehicle from outside investors, including “a large family office and a traditional LP base,” Sapphire Ventures President and Managing Director Jai Das tells Venture Capital Journal.

The firm wouldn’t disclose names of its LPs. Das adds that SAP remains an anchor investor.

To be clear, this isn’t the first fund from Sapphire Ventures to go outside SAP for LP support. In late 2018, the firm raised $115 for its SportTech Fund, which was raised from 29 LPs, according to a regulatory document at the time.

Transitioning from SAP to Sapphire

Sapphire, which was named SAP Ventures before it became independent in 2011, invests in enterprise companies in the Series B or later stages. Typically, this translates into companies with $10 million to $100 million in annual recurring revenue.

Some investment sizes are about $15 million. But Das says the $1.4 billion in fresh commitments, for its main and the opportunity fund, whose sizes are undisclosed, will allow it to invest up to $100 million per company as it continues to back companies in the US, Europe and Israel. 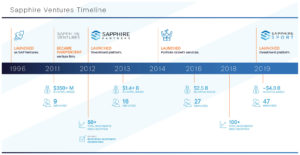 “We need to have the ability to support our companies a bit longer,” Das says. “That’s why we brought in outside LPs and raised more than we have in the past.”

Das notes that the firm has evolved into not just an investor but a provider of portfolio services.

This includes offering expertise to enable its portfolio companies to scale rapidly through its network of business development, marketing and talent connections. Das says that the expanded LP base helps to bring more diversity to its platform of portfolio services.

“We used to leverage our SAP connections, but now we use an expanded LP base to help our companies grow and acquire new customers,” Das says.