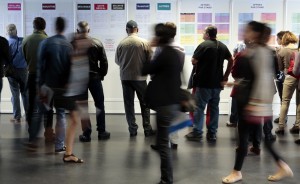 In good times and bad, startups and other established companies like to say it’s more challenging than ever to find and retain top talent, especially tech talent.

Sure, heavyweights like Google and Facebook can lure the best people with six-figure salaries, lucrative stock packages, and lavish perks. But it’s a lot harder for everyone else.

Thankfully, many startups are targeting the recruiting space, introducing new technology that makes it easier for the average company to attract and hire the best candidates.

“Coming out of the recession, the economy is looking stronger and companies are getting more aggressive in their hiring again,” said Eric Liaw, a principal at Institutional Venture Partners. “They are also trying to do so in ways that are more efficient and more technology driven. And that’s creating new opportunities to tackle this problem.”

It turns out there’s a lot of money to be made in helping companies improve the hiring process. The human capital management market is sized at $8.3 billion, according to Gartner.

Startups that target the recruiting space are taking a variety of approaches. Companies such as Hireology and Gild are introducing big data and machine learning to the hiring process. They say they are helping to make companies get smarter about who they hire by analyzing the behaviors of top performers and gleaning insights into how people go about looking for new jobs.

“The proliferation of social media means that our digital fingerprints are everywhere,” said Venky Ganesan, a managing director at Menlo Venture who participated in Gild’s recent $13.5 million Series B round. “And the digital trail we leave can lead to a lot of insights.”

Ganesan said that today’s recruiting system are good for finding people who are actively looking for a job. But they are not designed to identify passive candidates, people who already have jobs and could be persuaded to change positions. By applying big data and machine learning, like the kind Gild is developing, it’s now easier to find those people, Ganesan said.

“It could be as simple as analyzing someone’s tweet stream to understand their mood and their degree of frustration with their job,” he explained. “If you contact someone when they are frustrated at work they are much more open to a conversation about something new.”

Gild is initially targeting organizations looking for engineers, because technical talent is in such short supply. But the company plans to broaden its offering to include sales and marketing hires.

Companies that can streamline the hiring process, and recruit better people, can gain a huge competitive advantage. It currently takes a business about 100 days to hire a new employee and costs an average of $3,500 to do so, according to Deloitte Consulting. And still, there’s a 30 percent chance that the person will leave within 12 months.

The goal, Ganesan said, is to use data and analytics to hire better, faster and cheaper.

“This is ‘Moneyball’ for recruiting, he said. “What Billy Beane did for the Oakland A’s we are trying to do for the hiring manager.”

Hireology is another startup that is leveraging big data to help its small business customers make better hires. The company’s cloud-based system can help companies figure out things like what questions to ask in the interviewing process, how to verify what the candidate is saying is true, and how to determine if the candidate has good interpersonal skills.

“The beauty is that the more candidates we put through the Hireology system, the better it gets,” said Michael Krupka, a managing director at Bain Capital Ventures. “We can see anonymized data across all our customers, so we can start to put analytics around it, like which interview questions are working and which candidate actually best fits the job requirements.”

Hireology can also track performance data, such as which candidates stayed the longest after they were hired, and which ones added the most value to the business.

“We are starting to see clients that are displaying dramatically lower turnover and also generating stronger top line because they are hiring better people,” Krupka said.

Showing value is increasingly important. Menlo’s Ganesan agreed that the ability to prove out ROI will go a long way toward convincing HR departments, which traditionally have not been early adopters of cutting edge technology.

“This is next-generation stuff,” he said. “So it’s a matter of showing compelling results and getting them comfortable with doing things in a new way.”

Other companies, like Work4, are focused on the new world of social recruiting. Dana Stalder, general partner of Matrix Partners, said that companies large and small need to add social to their recruiting mix, or risk missing out on billions of quality candidates.

“People aren’t looking for jobs the way they used to, but employers still act as if they are,” he said.

With so many startups entering the market, competition is fierce and consolidation is inevitable. That’s a big reason why IVP plowed $63 million into ZipRecruiter.

The four-year-old company has built a profitable, eight-figure business by helping small and mid-sized organizations instantly post their job openings to more than 50 different online job boards and then filter and manage all the candidates that come in.

Krupka said that the market will ultimately consolidate.

“There are lots of companies being funded here,” he said. “At some point, many of these companies will collide, which will result in either M&A or a battle to the death.”

With his investment in Hireology, Krupka is hoping to catch lighting a second time in the human capital management market. In 2001, he led Bain’s investment in Taleo, an HR technology company that was acquired by Oracle for $1.9 billion in 2012. He’s betting that the latest generation of companies, such as Hireology, will also make an attractive acquisition target one day.

Venture investors in the space believe there’s a long list of potential acquirers, including traditional enterprise software players like SAP and Oracle, as well as newer competitors, such as Workday, Salesforce and LinkedIn, which may want to beef up their offerings around recruiting.

“There is an amazing opportunity for someone to create the next great hiring platform,” said Ganeson.