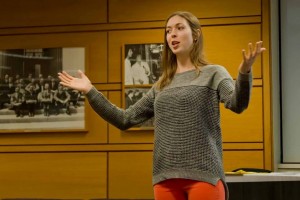 This past summer, I interned as an early stage investment associate, learning exactly how alienating it can feel to be a woman in the male-dominated venture capital industry and also how taboo it is to speak up about this seemingly pervasive, but unspoken issue that women are severely underrepresented in venture capital.

Since speaking out, I’ve received thousands of emails, comments and tweets either thanking me for taking a stand or berating me for doing so. While responses have varied, one thing is sure: People care about this issue. Experiencing the deep-felt passion these individuals have has launched me on a path to catalyzing change for the industry.

I’m not going to feign that I have all the answers. While I spent the past five years working with startups, seeing the VC gender issue from the outside, I only spent one summer in VC. I can give insights and brainstorm ideas all day, but they only go so far. What this problem needs is a group of industry insiders dedicated to solving it.

Over the past two months, I’ve had dozens of coffee meetings and phone calls with venture capitalists, academics and advocates across the nation, researching this problem. To each of these progressive thinkers, I’ve posed the question: How do we get more women in venture capital?

Men are a critical part of the solution

In almost all the movements regarding women in tech and venture capital, there exists a polarization between men and women, in which women play the victims of men’s actions. If the goal is diversity, we can’t exclude 50 percent of the population; that isn’t a truly diverse conversation. Plus, men hold more than 90 percent of the decision-making power in venture capital — without their advocacy, change will never take place.

Last month, I took part in a Women’s Leadership Council meeting held by Massachusetts Attorney General (and gubernatorial candidate) Martha Coakley. While a few men were present, I felt uncomfortable with the imbalance and made a point to give my feedback on the topic. Coakley responded that it is imperative for women to gather in a safe place first, before involving men. Point taken, but at some point, we need to come back to the table together and brainstorm real solutions. I would like to see this conversation become increasingly prevalent among male VCs — only then can we enact real change within firms.

Much of the gender gap conversation has been nothing more than that: conversation. We need action. Respected VCs should gather to solve the gender gap by extracting case studies for gender equality success in VC and disseminating learnings to their peers.

In seeking out industry success stories and best practices, I’ve surfaced quite a few directionless panels and blog posts. They point to nebulous solutions, such as talking about the problem and hiring more women. These are important steps, but I’m finding suggestions are not tested, nor are they measurable. They also lack a bite-sized, step-by-step feel that would make them actionable. For firms that have yet to hire a woman, getting a female investor aboard seems impossible, investors tell me.

We need more investors like Foundry Group’s Brad Feld, who recently published an insightful and actionable list of five ways to get more women into VC (note: column is behind paywall). Instead of recommending that firms “hire more women,” Feld digs down to more actionable items, including “training managers to help mitigate unconscious biases” and “analyzing job descriptions.”

Actionable solutions – such as reworking job descriptions or training managers on bias mitigation – seem easier to digest than “fix your culture.” These are the types of solutions we should seek.

There is great need for industry-wide best practices

Venture capitalists want direction on this topic, but have little time to think about how their firms could improve practices. If, however, a group of progressive industry insiders made time to work together and disseminate best practices, the impact could be huge.

The industry could greatly benefit from an organization that sets industry-wide best practices regarding unconscious bias training, diversity hiring practices and inclusive culture building. This group would be composed of esteemed venture capitalists, both men and women, who are inspired to speak up and find solutions for the gender gap.

We must stop relegating this topic to one-off panels and conference keynotes. Instead, we should surface relevant success stories — whether from within VC or related industries — and distill them into best practices and easy-to-follow steps for firms to apply.

The National Center for Women & Information Technology (NCWIT), for example, creates diversity best practices for startups and technology companies. It has built a growing treasure chest of resources, including tips for identifying male advocates and increasing their advocacy, alongside a series of tips for startup managers wishing to hire and retain talented female technologists. Resources like these should exist within the venture capital community, and they should be powered by an association tasked with finding, testing and communicating the best strategies for gender equality.

I hope there comes a day in my lifetime when reading about investors harassing and having biases against female founders is shocking, rather than the norm. And I hope there comes a day when women venture capitalists aren’t rare, but rather just another awesome group of well-represented investors who invest in promising, diverse entrepreneurs. I hope I see the day when women aren’t paid less for their work and expected to keep their mouths shut when they experience unequal treatment at the office.

Over the coming months, the coffee meetings and roundtables shall continue, and I aim to flesh out steps for solving the VC gender gap, starting with the aforementioned topics: how to get more men involved in brainstorming and implementing solutions; how to create and distribute action items to the industry at large; and how to make this effort sustainable, likely through the founding of an organization that focuses on gender equality in venture capital.

None of us can solve this alone. This problem demands ideas and input from active investors who want to be a part of the dialogue. Please do comment below or reach out to me individually to share your thoughts on closing the gender gap in venture capital.

Erica Swallow is a technology writer, startup entrepreneur, and status quo wrecker. She is currently an MBA candidate at the MIT Sloan School of Management and her thoughts have been published in a number of esteemed outlets, including Forbes, Entrepreneur, The Wall Street Journal, and The Huffington Post, among others. Erica is a graduate of New York University’s Stern School of Business with a Bachelor of Science in International Business and Marketing. She is expected to graduate from the MIT Sloan School of Management MBA Program in June 2015. Read her blog, follow her on Twitter @ericaswallow or shoot her an email: ericaswallow@gmail.com.