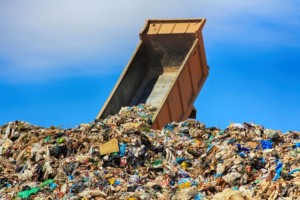 Children are often told to finish their plates because there are so many starving kids around the world. But what many people forget is that food waste is also terrible for the planet and a chief contributor to climate change.

Every year, the world produces about 4 billion tons of food, of which nearly one-third ultimately gets thrown out. The US alone discards $165 billion annually in uneaten food, according to the Harvard Food Law and Policy Clinic and the Natural Resources Defense Council. All that rotting food produces methane, a greenhouse gas even more harmful to the environment than carbon dioxide.

The UN Food and Agriculture Organization estimates that, if food waste were a country, it would trail only China and the United States in terms of the damage it inflicts on the planet.

It turns out that reducing food waste is not only vital for ending hunger and sustainably feeding the world, it’s also one of the most effective ways to slow global warming. Today, a number of VC-backed startups are introducing new technologies that could curtail food waste and help save the planet.

“The size of the food waste challenge is huge. But that also means the size of the opportunity is massive,” says Jamie Butterworth, a partner at Circularity Capital, who led his firm’s investment in Winnow. The startup raised $12 million for its AI-based technology that makes it easier for large, commercial kitchens, such as corporate cafeterias and hotel kitchens, to reduce the amount of food they throw out.

The Winnow system snaps digital photos of food as it gets tossed in the garbage. The system’s machine learning algorithm uses those images to train itself to recognize which items are getting thrown out the most and why. The system then generates real-time reports that identify the main culprits for food waste. Kitchens can then act to reduce food waste and implement training techniques for their staff.

“In some of these large commercial kitchens, it’s not uncommon for about 20 percent of the food to be thrown out,” Butterworth says. “Unless you’ve got the data, you’ll never be able to fix the problem.”

Winnow is designed to give kitchens the kind of data they need to make smarter decisions. With Winnow, kitchens are seeing a clear link between their reduction of food waste and their increase in profitability, he adds.

To date, companies like Phillips, IKEA, Hilton and Club Med have implemented the Winnow system, preventing about 24 million meals from being wasted each year. Winnow says the IKEA flagship store in Bergen, Norway, has cut food waste by 4 percent and saved more than 29,660 meals by using the system to prepare smaller quantities.

While there are environmental and financial reasons for implementing a Winnow system, Butterworth admits that some potential customers remain skeptical and will want to see proof that the system will pay off for them in the long run.

The biggest challenge in coming to the market with a new technology like Winnow is educating the market, he says. “That’s why the company is targeting large commercial kitchens and building up a base of reference customers that are getting a real bang for the buck.”

Another startup using AI to help solve the food waste problem is Afresh Technologies, which has raised $7.8 million from Baseline Ventures and Innovation Endeavors. The company’s target market is grocery stores and retailers that throw out $18 billion worth of spoiled food each year in the US, according to food industry nonprofit ReFED.

Most of that perishable food, including fruits, vegetables, meat and dairy, ends up rotting in landfills and emitting climate-harming gases. The Afresh system uses AI technology to help grocers optimize the amount of perishables they carry at stores.

It’s a step up from the pen and paper system that many grocery chains still use to manage their fresh food inventory. Inventory managers enter their orders into a tablet, and the Afresh machine learning algorithm calculates with a higher degree of accuracy how much fresh food they actually need and when they should be placing those orders. The goal is to help grocery stores minimize food waste and stop throwing out a significant percentage of their fresh food.

Startups Karma and Olio are also trying to solve the problem by creating marketplaces that allow restaurants, grocery stores and individuals to unload their unsold food at a discount. Karma, based in Sweden, raised $12 million led by Kinnevik AB for its app that connects buyers and sellers of food. For instance, a local bakery can use the app to advertise its unsold cupcakes at a discount. Consumers use the app to pay for items and can then pick up their purchases in person.

Olio, which has raised $8.2 million from Octopus Ventures and others, is an app that connects neighbors so they can share food instead of chucking it away. For instance, it’s a guilt-free way to empty your fridge before leaving for a long business trip or vacation.

“Olio has already grown from a small set of users in North London to a community of over half a million, sharing food in 32 countries,” Zoë Chambers, who led the investment for Octopus, says in a blog post. “Forty percent of food listings (on the Olio platform) are requested within one hour and 75 percent within 24 hours.”

Businesses such as supermarkets, restaurants, and corporate canteens can pay a small fee for having Olio volunteers pick up and redistribute their unsold or unserved food at the end of the day. The benefit for these businesses is that they show they are good corporate citizens and are doing their part to help solve serious societal and environmental issues.

“Retailers told us that having a waste reduction strategy in place was the number one concern flagged by employees in their feedback surveys,” Chambers says. “It’s not just a PR issue for them, it is a genuine retention issue.”

Some startups like Apeel Sciences and Hazel Technologies are using more hard-core science to solve the food waste problem by slowing down the rate of spoilage.

Apeel has raised $110 million from Andreessen Horowitz, Upfront Ventures, and S2G Ventures for its technology that adds an extra layer to the surface of fresh produce, naturally reinforcing the original peel and slowing the rate of water loss and oxidation. The company says that produce with Apeel stays fresh two to three times longer, thus helping to prevent spoilage and lessen food waste.

Hazel, for its part, is extending the shelf life of fresh produce through the development of a small packet that can be placed directly into the shipping crates of fresh fruits, vegetables, seafoods and meats. The Hazel insert releases active ingredients over time that modulate the atmosphere within the crates, reducing the respiration rate and increasing resistance to ethylene. The result is fresher produce received by grocery stores and longer shelf life of those goods. The company has raised $17.8 million to date from Pangaea Ventures and S2G Ventures.

“Hazel is a drop-in solution that works in today’s supply chain and has treated over 800 million pounds of produce,” says Matthew Walker, a partner at S2G Ventures. “It’s a very appealing solution because it means the delivery of more Class A produce.”

But there are some unique challenges for food waste startups. “In other venture-backed sectors there is the ability to go from zero to billion in one or two years,” says Walker. “That’s not really the case here. These investments require a little more patience.”

He adds that food waste startups only have one shot to get the technology right because customers have high-value perishable products, and if you screw up you don’t get another chance with them. Some food waste startups must also meet strict regulatory requirements to prevent anything dangerous from entering the food system.

Despite the challenges, Walker sees interest and excitement building around the food waste sector.  “Investors are realizing there really is a there there,” he says. “Food waste startups are delivering solutions that can be massive in terms of both their economic value and environmental impact.”