Amid all the hand wringing about a tech bubble, a new reality is hiding in plain sight: Late-stage, venture-backed companies have become their own asset class.

This new asset class – Private Tech Growth, as we refer to it – is comprised of high-growth private technology companies. These firms have completely transformed the venture ecosystem that has evolved over the past 40 years. They have shifted the center of gravity to those companies with $1 billion or more in combined market capitalization.

Companies in this asset class have little in common with early stage, venture-backed companies, despite their common experience in receiving private venture funding. These large, private market growth companies have working business and revenue models, are often market or sector leaders, and can get as much capital as they need from very willing investors. They are also in no rush to go public. 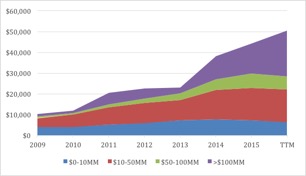 How Did This Happen?

This emergent asset class started in 2009, when Facebook became the first mega-homerun, followed soon thereafter by LinkedIn and Twitter. In the past few years, it’s come fully into its own. Consider the following:

What It All Means

The emergence of this new private growth asset class has numerous implications for everyone in the venture ecosystem.

First, we’re likely to see many more private high growth technology companies, rather than fewer, despite predictions of doom and gloom. More than $50 billion annually is being invested in private technology companies, but only about $27 billion in “classic” venture capital, i.e. via rounds of less than $100 million that fuel early stage companies. The VC batting average – the success rate of venture-funded companies – has remained remarkably constant over the past two decades years. For every 100 VC-funded companies, about 1.5 percent hit it big as “home runs” into the new private growth asset class. The seeds of a new crop of many home runs continue to be planted.

Second, institutional money – the rocket fuel for these mega rounds – will only accelerate. Mutual fund companies, pension funds and other institutional investors are moving into this asset class because private market companies are growing at double- and triple-digit rates – performance they simply can’t get from public market companies. (Airbnb reportedly saw its revenue grow 89 percent this July from a year ago and just last week raised an estimated $550 million!) These institutions are the same investors who previously gobbled up IPOs. Now they’ve moved into this asset class.

Third, there will be less emphasis on IPOs as a goal. Private high growth companies can get all the capital they need, without the burdens and regulatory expense of being publicly traded companies. Their brand is also strong enough that they don’t need the imprimatur of a public listing. Instead, we’ll see more $100 million or even more $1 billion rounds – something unheard of just a few years ago.

The bottom line is that sooner, rather than later, companies in this asset class – which had an aggregate market cap of $100 billion just 2.5 years ago – could be worth $1 trillion. In Silicon Valley, even the innovators can’t escape innovation.