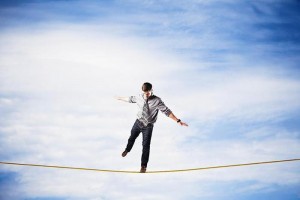 It is easy to get excited by sharing economy companies Uber and Airbnb. Wearables hold the power to reshape consumer behavior and generate colossal investment returns. Putting a wallet in your phone? Huge.

Venture has no shortage of massive technology bets.

Yet the biggest bet may lie in the enterprise, where companies large and small are capitalizing on cloud-based architectures and applying the lessons of big data to remake the entire enterprise technology stack from network layers to applications.

However, while technology roars along at a Formula One pace, a fundamental reassessment of enterprise valuations is underway, not just in the public markets, but in the private ones. The public stock prices of young SaaS companies fell hard in March and April when the Nasdaq market stumbled. Still the shares remain rich and another decline could be on the way as the period of cheap money comes to a close and the Federal Reserve contemplates lifting interest rates.

So far, private company valuations, which usually trail public ones by six months, have experienced only modest declines. That means private companies could presently be overvalued, and that VCs could feel the pain if the gap between public and private closes.

This may not yet seem like a cause for alarm. But the obvious danger is that deals done at today’s prices will not look as smart in several months. This will be all the more true if public market multiples tumble again and venture funds systematically exposed to high valuations find expansion-stage money harder to raise and up rounds less frequent.

Many VCs think they have a hedge in the M&A markets. If public market prices come down, acquirers might be more inclined to go shopping. Still it is no guarantee.

As a result, venture deal making has begun to show defensive signs. Entrepreneurs and investors have been closing deals more rapidly, deciding to lock them in rather than delay them. The rush of late spring and early summer deal activity seemed higher than normal as term sheets signed several months earlier were executed and verbal commitments made to hold up.

Other investors have begun to practice greater due diligence as if acknowledging a more challenging period could be ahead. This has placed greater emphasis on capital efficiency and long-term customer value rather than simple growth.

Behind it all is the fact that even though public market SaaS prices took a big hit, a case can be made that prices are still high even as enterprise investing races along at a rapid pace.

The Bessemer Venture Partners’ Cloud Computing Index of 38 publicly traded companies, including the recent venture-backed IPOs Workday, ServiceNow, Veeva and Marketo, fell 28 percent from late February to the beginning of May.

That brought forward-looking revenue multiples for high-growth SaaS companies to an average of 7x from an average of 12x before the selloff, according to Maltz.

Stocks have recovered a bit since then. But forward multiples for the most promising companies still range as high as 17x and remain for others between 11x and 6x. For comparison, Salesforce.com’s multiple is 5x, Oracle’s is 4x and General Electric’s is 2x.

Public market investors have been willing to pay these kinds of prices because of high growth. But the amount of Wall Street money willing to chase these stocks is not unlimited, warned David Readerman, a portfolio manager at Endurance Capital Partners. This is especially true for businesses that continue to lose money, as many SaaS companies do.

Rising interest rates will test the stock prices, Readerman said, and another correction could be ahead.

“We’re seeing early signs” of an adjustment, “but very limited,” noted Byron Deeter, a partner at Bessemer. “Increasingly it’s starting to roll through.”

“Invariably the market is going to weaken at some point,” said Tim Porter, a managing director at Madrona Venture Group. “By definition, things won’t stay this way for ever.”