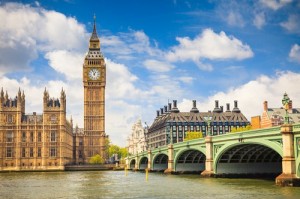 Brexit who? The United Kingdom continues to trailblaze the European VC market in regards to deal count and the amount of invested capital.

The U.K. clocked a 99.8 percent year-over-year growth rate from H1 2018 to H1 2019 regarding the volume of invested capital, according to a report released by Refinitiv. More than €4.25 billion ($4.6 billion) flowed into the region during those six months.

London saw the most activity in the bustling region and closed more than half of the deals, 150, and 80 percent of the U.K.’s invested capital. The average deal size in the city was €26.5 million.

Four of the most active European VC firms investing in the continent are based in the UK including Merica Fund Managers, Balderton Capital and Index Ventures.

One U.S.-based firm made the list of top 10 most active investors in Europe. Accel, which is a previous backer of Deliveroo, landed at number eight having invested more than €88.6 million across 11 deals in H1.

France had the second most active VC market in Europe in H1 2019. Startups in the country received more than €2.2 billion across 178 deals. The amount of capital invested was up 58.2 percent year-over-year despite the deal count being down 14.8 percent.