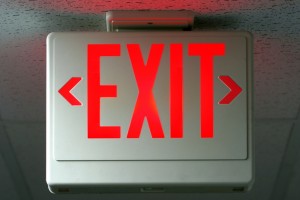 The volume of venture-backed initial public offerings slowed in the third quarter from the prior quarter, while acquisitions with disclosed dollar amounts came in higher.

Those were some of the findings from the third quarter Exit Poll report by Thomson Reuters and the National Venture Capital Association (NVCA), published today. Overall, the report counted 23 venture-backed companies that went public on U.S. exchanges in Q3, compared to 28 in Q2. The companies that went public in Q3 raised a total of $2.56 billion, down from $4.94 billion in Q2, an unusually high-rolling quarter.

Acquisition volumes ticked up in the third quarter, based on both deal number and disclosed size. Overall, there were 119 venture-backed M&A deals reported in the quarter. Of those, 32 had disclosed prices, which added up to $7.9 billion. That was more than double the disclosed value recorded during the second quarter of this year, in which there were 110 M&A transactions, including 37 with disclosed prices.

The just-ended quarter marked the sixth consecutive quarter to see 20 or more venture-backed IPOs, with life science offerings accounting for the bulk of activity. In all, 18 of the 23 offerings during the quarter were life sciences IPOs.

Still, the largest VC-funded offering of the quarter came from the tech side. Mobileye NV, an Israel-based developer of advanced driver assistance software, raised $1 billion and began trading on the New York Stock Exchange on July 31st. The company is trading more than two times above its $25 offering price.

Fourteen of the 23 companies brought to market this quarter are trading at or above their offering price, according to the report. There are 48 venture-backed companies currently filed publicly for IPOs with the SEC. That figure does not include confidential registrations filed under the JOBS Act, where many observers believe the majority of venture-backed companies now file.