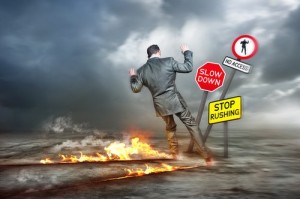 Venture capitalists pulled back during the fourth quarter with investments to U.S.-based startups reaching their lowest point in six quarters.

Expansion and later-stage investing suffered the most. Dollars supporting these rounds fell 45 percent from the third quarter, according to the latest MoneyTree Report by PricewaterhouseCoopers and the National Venture Capital Association (NVCA) based on data from Thomson Reuters.

The weakness comes during a turbulent period for public stocks and amid increasing concerns over high valuations for late-stage private companies. The latest Silicon Valley Venture Capitalist Confidence Index, released in November, tumbled to its lowest reading since the end of 2011, reflecting this caution.

For the final quarter of last year, VCs put US$11.3 billion to work at U.S.-based startups, down 32 percent from the third quarter, according to the MoneyTree Report. Deal volume fell 16 percent.

Most industry sectors felt the pain, from software to biotech to IT services. Software investing was off 24 percent in dollars and biotech was down 32 percent. Internet specific funding fell harder, slumping 42 percent, the report found.

Activity in the biotech sector reflected the pattern in venture broadly, said Luke Evnin, a managing director at MPM Capital.

“The market overall was relatively robust for the year, but the fourth quarter was a huge step back in the quarterly progression,” he said. If the public markets don’t settle down, 2016 could see a decrease in biotech investing, he predicted.

Across all industry segments, early-stage deal making was off 9 percent in dollars during the fourth quarter and 18 percent in deals.