It’s been a tough few years for cleantech. And while no one expects a huge upturn, key specialist venture firms continue to selectively put money down on promising technologies.

Money invested in the broad cleantech sector, which includes solar, energy-efficiency, battery-storage, water and related technologies, has continued to decline and is off its high of the past decade when such companies as BrightSource, Fisker Automotive and Solyndra were raising large rounds.

In 2016, cleantech startups and late-stage companies raised $1.55 billion in funding, 16 percent less than the $1.85 billion raised in 2015, according to VCJ‘s analysis of preliminary data on venture deals from Thomson Reuters.

In 2004, investment in the North American cleantech sector was below $1 billion. It peaked in 2007 when 267 companies raised $4.9 billion and remained robust when a record 334 companies raised $4.77 billion in 2011 (see table below). Venture investment in the sector reflected a number of factors, particularly consumers’ greater interest in solar and other clean technologies.

In addition, 2007 was the year that former Vice President Al Gore won an Oscar for the documentary An Inconvenient Truth. It was also the year that John Doerr, the Kleiner Perkins Caufield & Byers partner, gave an emotional speech at a TED conference about climate change and renewable energy, relaying how his teenage daughter told him it was his generation’s responsibility to combat global warming.

The year before, Doerr said greentech would be huge, and Kleiner Perkins and other generalist firms, including Khosla Ventures, went all in on the sector.

Solyndra, a developer of solar technology, was one of the companies that ramped up quickly during that time, raising about $1 billion in debt and equity and more than $500 million in government subsidies.

However, in 2011, in the wake of the Great Recession, fluctuating silicon prices, and overseas competition from China, the Fremont, California, company filed for Chapter 11 bankruptcy and closed shop.

Investment in North American cleantech has steadily declined since then.

Although many generalist VCs now shy away from the sector, specialists like Braemar Energy Ventures and NGEN Partners continue to invest in cleantech. Kleiner Perkins also remains committed to the sector, having backed three of the top 20 largest cleantech deals in 2016: Aquion Energy, Siluria Technologies and Enlighted.

Aquion, which makes batteries and energy-storage systems, also raised money in 2016 from Foundation Capital. The firm was a backer of energy-storage maker Sunrun, which went public in 2015.

Foundation Partner Steve Vassallo, who is on the boards of Aquion, Sunrun, Sentient Energy and AutoGrid, sees Aquion’s energy-storage technology as a game-changer in several key markets.

The largest deal of the year was Sunnova Energy, the Houston provider of rooftop solar service to homeowners. The company secured a $300 million equity investment from Energy CapitalPartners. 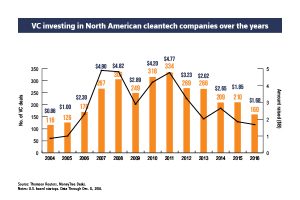