Venture Capital Journal
Home News and Analysis Firms & Funds Year in review: Exits on the up and up
Return to search
Firms & Funds 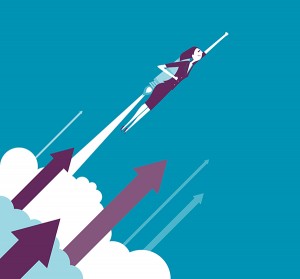 Two thousand fourteen ended with a pop, and not just from the corks in New Year’s Eve champagne bottles.

A string of well-received late December public offerings capped a strong year for venture funded IPOs and helped cement high hopes for 2015. Lending Club, Hortonworks and New Relic all jumped 40 percent or more on their first day of trading, despite the latter two pricing their stock below its value in late-stage private rounds. Their success gave the year a nice lift.

“Everybody in the venture business would say it has been a very good year,” said Mark Siegel, managing director at Menlo Ventures, referring to the past year’s IPOs and M&A exits.

If interest rates stay low and the economy stays healthy, Siegel said, “I do think it spells more of the same for 2015.

There are many reasons to think the exit environment will stay upbeat. The U.S. economy continues to perk up with consumer spending on the rise, better hiring, low oil prices and strong GDP growth.

Venture companies lining up for IPOs next year are not just plentiful but often have solid fundamentals, with $100 million revenue run rates growing at 30 percent or more, and the potential to rock the foundations of traditional markets, from education to health care to transportation to high tech.

“Everybody in the venture business would say it has been a very good year.” –Mark Siegel, Managing Director, Menlo Ventures

CB Insights estimates as many as 588 venture-backed businesses fall into this bucket with the size and growth to consider going public. Their enthusiasm is reflected in the rising number of confidential registration statements on file with the Securities and Exchange Commission: More than 700 at the end of the third quarter, up from about 500 in March. That’s a pace of more than one new growth company filing each day over the six months.

But there are crosscurrents, too. On the economic front, China’s economy is slowing, Russia and Japan have entered recession, and Europe is a big unanswered question. Terrorism is always a wild card. All of this could shake the conviction of Wall Street traders.

More importantly, domestic interest rates are likely to begin rising, shifting public market attention to such factors as profitability and cash flow and away from growth at all costs.

In this environment, late-stage deal pricing could become a hurdle both to public offerings and M&A transactions, as the experience of Hortonworks and New Relic may have signaled. If high-priced late stage rounds end up underwater, the pace of acquisitions and IPOs could slow, especially in a rising interest rate environment where risk capital becomes more expensive.

In general, 2014’s exit numbers paint a pretty picture. As of mid-December, 119 venture-backed companies went public, the highest number since 2000. Volume was up by one-third from 2013 and more than double 2012’s, according to preliminary data from Thomson Reuters.

The year was a banner one for life sciences IPOs, particularly biotech. As of mid-December, 77 life sciences deals were done, 65 of them biotech, a huge jump from 2013. Tech IPOs essentially matched 2013.

Aftermarket performance was respectable, as 51 percent of new offerings traded above their offering price as of mid-December, while 47 percent did not. Two deals were unchanged.

Venture-backed M&A turned in a solid, if unspectacular year. Volume was up 10 percent from 2013, but well under the recent peak years of 2010 and 2007, according to data through mid-December from Thomson Reuters. IT deals made up more than three-quarters of transactions.

Many venture investors expect improvements in 2015 in both IPOs and M&A, or at least more of the same.

“There is a lot of supply of early-stage startups due to the growth in seed-stage investing.” –Ramneek Gupta, Managing Director, Citi Ventures

“It’s been a very good year on a relative basis, really the best year since the bubble period, said Sandy Miller, a general partner at Institutional Venture Partners. “I’m still surprised there hasn’t been more on the IPO and M&A side.”

Miller expects IPO volume to be up significantly in 2015, perhaps 25 percent to 50 percent. He also is bullish on M&A.

That’s because large tech companies have piles of cash and increasing pressure to use it. An examination by VCJ found 15 of the nation’s largest tech companies had $557 billion of cash and marketable investments on their balance sheets at the end of the third quarter, a total that does not include Yahoo’s $34 billion of Alibaba holdings. Miller expects M&A to show a meaningful increase in 2015.

He is not alone.

“I would expect to see M&A increase over what we are seeing now,” agreed Tim Porter, a managing director at Madrona Venture Group. “I see the pace of innovation continuing unabated and bigger guys feeling increased urgency to keep up the pace. The strategic drivers continue to increase next year.”

This should also be true for the smaller M&A deals that many times fly below the radar. The market for these smaller, tuck-in deals where teams and products are absorbed into larger companies has been more active in 2014 than 2013, said Ramneek Gupta, a managing director at Citi Ventures.

The pace should continue into 2015, he added. “There is a lot of supply of early-stage startups due to the growth in seed-stage investing.”

On the life sciences front, the IPO market opened up in 2014 and provided a year of redemption for firms that stayed in the space, said Terry McGuire, founding partner at Polaris Partners.

McGuire said he expects the 2015 IPO market to be a lot like 2014’s, as long as new, novel ideas prove out. If three or four products have difficult clinical results, activity could slow. The pace of M&A activity could be similar as well, slowing perhaps if the number of IPOs rises.

The environment for medtech IPOs, “I would say is going to continue at least six months, if not 12 months,” agreed Casper de Clercq, a partner at Norwest Venture Partners, who along with McGuire doesn’t expect the IPO window to close. “Medtech companies have reasonable valuations based on solid fundamentals.”

Biotech may be a harder call. Typical biotech up cycles last one to 2-and-a-half years and the present cycle is roughly 18 months old.

Several factors, however, could upset the apple cart. High private company valuations, particularly in technology, are already impacting M&A, where some acquirers have backed away from transactions.

“You have to pay up to do deals,” Gupta said. “Not every company has that leeway.”

No signs of a change are on the horizon.

“I’m still surprised there hasn’t been more on the IPO and M&A side.” –Sandy Miller, General Partner, Institutional Venture Partners

Another factor slowing M&A is the access to cash. Many large cash-rich tech companies have a significant amount of their cash overseas and not within easy reach of acquisitions in the United States.

Apple, for instance, reports that 84 percent of its $155 billion in cash, cash equivalents and marketable securities, are held by foreign subsidies. Cisco says it has about 93 percent of its cash and securities, or more than $52 billion, are tied up outside the United States.

The easy availability of private capital to top name companies could hold back the tide as well. These companies, such as Airbnb and Uber, have less pressure to tap the public markets or consider selling out.

Perhaps most important is the shift in monetary policy. “The rules will change next year,” said public market investor David Readerman, a portfolio manager at Endurance Capital Partners. “The window is not going to be as wide in a rising interest rate environment.”

This narrowing could create some resistance to deals that rely primarily on revenue and growth to set valuation. Public market investors became more focused on cash flow in 2014 and this should continue in 2015.

“Great business models with great management teams and open ended growth opportunities will always have an opportunity to come to market,” Readerman said.

But public market investors appear to have a “much tighter valuation discipline” than some late-stage dealmakers, he added.

The big unknown next year will be how much this discipline asserts itself and triggers caution on public and private deal pricing.