(Reuters) Tech startups aimed at businesses rather than consumers are winning more funding from increasingly wary venture capital investors who want to see a return on their cash sooner rather than later.

This shift has enabled Soundtrack Your Brand, which plans a U.S. launch this year, to secure $11 million to back its tailor-made music playlists for companies with deep pockets like Starbucks and McDonald’s.

Investors are buying into the Spotify-backed Swedish company’s theory that piping the right music into such food outlets or retail stores will encourage coffee drinkers or shoppers to linger longer and spend more.

Soundtrack Your Brand says businesses pay about five times what consumers pay for their tunes, which strikes a chord with investors seeking more stable earnings.

“There is a trend away from consumer unicorns and valuations,” Andreas Liffgarden, the company’s chairman and co-founder, told Reuters.

“I can feel it when we’re out fundraising. Investors want real steady cash flow and proven business models,” he added.

This shift reflects a combination of market volatility, high valuations and growing fears of another tech bubble which have led venture capitalists to reassess risk and back more business-to-business (B2B) startups over those aimed at consumers.

Venture capital funds are also seeking a clearer way to cash in their investments. Tech.eu, which analyses tech data, said B2B made up 60 percent of all European exits last year.

Funds invested in B2B startups rose by 40 percent to $11.9 billion year-on-year to the end of March, figures from venture capital database PitchBook show.

And although funding for business-to-consumer (B2C) startups remains larger, investment in this area fell 9 percent to $24 billion over the same period. 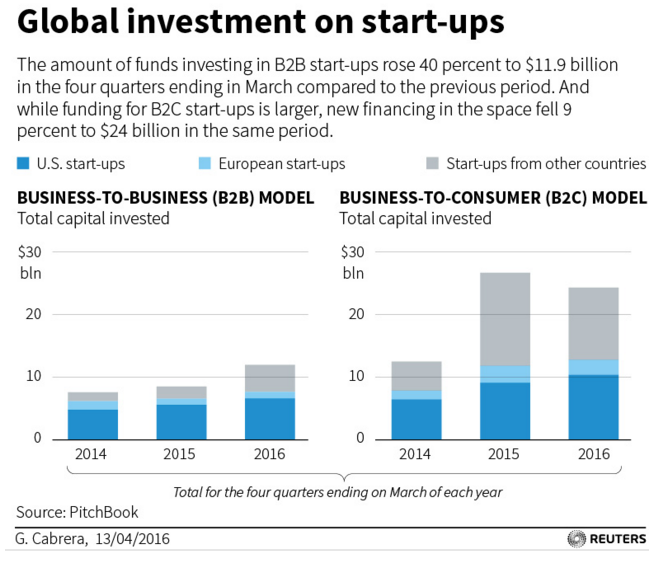 Philipp Leutiger, a partner at management consulting firm Roland Berger, describes B2B as “very hot” with investors hunting for capex-light business models with the potential to be profitable at a very early stage.

One of Europe’s most highly valued tech startups, Swedish payments firm Klarna, which support merchants and competes with the likes of Paypal has shown this is possible. It turned a profit in only its second year.

Dave McClure, founder of a venture capital seed fund and startup accelerator called 500 Startups in Silicon Valley, said that while 60 percent of his investments are in consumer-oriented companies, probably a bigger proportion of B2B startups are having greater success.

Jonathan Userovici, an analyst at Idinvest Partners in Paris, is betting other B2Bs will grab venture capital money more easily than B2Cs this year as investors seek out recurring revenue-generators.

Human resources is attracting particular interest and Zenefits, whose software automates things like stock options and vacations, raised more than $500 million in the biggest U.S. B2B funding round last year, according to PitchBook data. It ran into regulatory troubles this year, a reminder that there are still risks involved in B2B investments.

And while B2B investments are considered more predictable than the hits-driven consumer business, the allure of consumer start-ups remains. In the past decade, the biggest consumer successes have produced far bigger returns than B2B firms.

That means not everyone is abandoning the consumer.

McClure at 500 Startups is keeping a foot in both camps: “I don’t think we feel any less optimistic around consumers. I think we feel more optimistic about potential for B2B now that it’s starting to globalise and grow and have a greater reach.”

Startup Soundtrack Your Brand has a sign displayed in a Starbucks cafe in Stockholm, Sweden, April 6, 2016. REUTERS/Mia Shanley