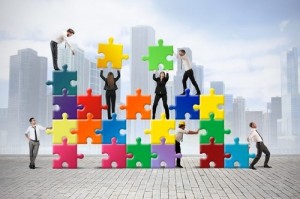 In the fourth quarter of 2015, Canadian merger and acquisition activity declined for a fifth time in six quarters, a fact masked by near-record value levels. That’s according to data developed by Crosbie & Co using Capital IQ and other sources. A total of 643 announced deals were recorded in Q4 2015, down from 705 deals a year ago. However, values in the final three months of last year totaled $137 billion, up from $116 billion in Q4 2014. Domestic activity, reflecting 435 deals valued at $20 billion in Q4 2015, was lower by all measures year over year, with outbound activity (Canadian buyers of foreign targets) accounting for the gain in dollar terms.

While Canadian M&A activity declined for the fifth time in six quarters, deal value was at near-record levels due to several large mega-deals (transactions over $1B). Figures developed by Crosbie & Company using Capital IQ and other sources indicated 643 announcements valued at $137B in Q4 (down from 705 deals worth $116B in Q4 2014). This was the lowest level of activity in the past two years. For domestic transactions (where the target is in Canada) there were 435 transactions valued at $20B (down from 454 deals worth $66B in Q4 2014 and consistent with the 433 deals worth $18B in Q3 2015).

“Robust activity at the top end of the market has overshadowed a narrowing of core domestic M&A activity,” said Richard Betsalel, Managing Director at Crosbie & Company. “With oil continuing its slide below US$30 per barrel, buyers in the energy sector have moved to the sidelines. We expect those buyers to remain cautious until oil prices exhibit some degree of stability or distressed companies are forced into selling assets at fire-sale prices.”

There were 17 mega-deals announced in the quarter with a total value of $119B compared to 14 deals valued at $90B in Q4 2014. The largest announced transaction was CP Railway’s $50.3B offer to acquire Norfolk Southern, the second-biggest railroad in the eastern U.S. However, CP’s vision of creating North America’s largest railroad faces major regulatory hurdles and potential push-back from shippers and unions.

Canadian companies made 153 acquisitions of foreign targets valued at $106B compared to 185 transactions valued at $42B in the same quarter last year. “The one bright light in the quarter was Canadian companies remaining active making acquisitions abroad,” said Richard Betsalel. “The 15% depreciation in the Canadian dollar versus the US dollar in 2015 has not deterred Canadian companies from making foreign acquisitions. Pension funds and private equity groups led the charge acquiring long-lived infrastructure and real estate assets as they seek to increase their exposure to assets that generate stable inflation-protected returns in higher growth markets.” The second largest transaction of the quarter was Caisse de dépôt’s $12.6B acquisition (as part of a consortium) of a 99-year lease of TransGrid, owner and operator of an electricity transmission network in Australia. Another notable deal involved CPPIB, OTPP and OMERS teaming up to acquire Skyway Concession, owner and concessionaire of Chicago Skyway toll road, for $3.8B

Mid-market M&A activity declined proportionally with the overall decline in the quarter. There were 270 reported transactions under $250M valued at $8.4B – representing 87% of all transactions with reported values. We note that mid-market M&A was weak throughout the year, declining 21% compared to 2014.

Cross-border transactions in the quarter represented 39% of all announcements, in line with the long term trend. However, 80% of the total value of the deals in the quarter represented cross-border M&A, the highest level in over 5 years. Canadian companies continued to be very active internationally in Q4, acquiring 1.6 times more companies abroad than foreigners acquired Canadian companies while outspending their foreign counterparts $106B to $4B.

The information contained above and within the “Crosbie & Company Canadian M&A Report” is a summary analysis of the quarter’s M&A activity. For further information, please contact Richard Betsalel at 416-362-4882 or visit www.crosbieco.com.