Venture investing hit a record in Israel last year, even as it pulled back in the United States, Europe, India and South America.

This news will likely surprise GPs without boots on the ground in Tel Aviv, since greater exposure to Israel isn’t exactly a top strategic priority at many partnerships.

But perplexed VCs might be wise to look at what’s been taking place.

In one sense, the interest is the result of a shift to new areas of technology, such as the Internet of Things, fintech, robotics and autonomous driving, paralleling entrepreneurial trends in the United States. Israel also is the beneficiary of an expanding tech ecosystem, as large companies establish local bases, including Google, Apple and Facebook. In May, HP Inc established a corporate venture group with an office in Tel Aviv and a focus on IoT, artificial intelligence and smart machines.

But more important is a surge of growth investing, with larger checks written for companies ready to scale. Some claim this reflects a more mature startup ecosystem and a shift away from the traditional model of quick flipping young companies for a fast profit in favor of growing them for bigger returns down the road.

“In 20 years of investing, I have never seen the hotels so full of foreign visitors, whether it’s corporate development, venture investors, bankers, lawyers, or U.S.-based employees of Israeli startups,” said Adam Fisher, a partner at Bessemer Venture Partners. “Israel literally has something for everyone and it a location that serious investors cannot afford to ignore.”

Foreign capital, of course, is nothing new in Israel. U.S. venture firms have invested more than $8 billion over the past two decades, according to data from Thomson Reuters. And like Silicon Valley, real innovation takes place, with engineers creating new technology products where none existed before.

But recent years have shown something more. Venture investments in high-tech companies rose 154 percent in the past four years from less than $2 billion to an all-time high of $4.8 billion in 2016, which was an 11 percent gain over the previous record in 2015, according to the IVC Research Center and law firm ZAG.

Fueling this is a growth in the average round size to a record $7.2 million last year as deal flow slipped by 7 percent. The number of large deals with capital topping $20 million rose 22 percent.

Other foreign capital was active, too, with money from Europe, Russia and Australia and China increasing and the share of total capital coming from U.S. investors falling by about 5 percent. Some say the Chinese experience in Israel has been mixed because few Israeli entrepreneurs target the Chinese market early on and therefore find Chinese Rolodexes less useful.

Nonetheless, the market is changing and U.S. firms are helping to drive it. This is no more evident than in cyber security, where investor awareness of Israel as a good source of companies has clearly risen.

Sequoia sparked controversy when news reports claimed it rolled its Israeli fund into its U.S. fund. The likely culprit was a generational transition in Sequoia’s Israeli team, according to an industry source.

Behind the shift to growth is what investors describe as an evolution of the venture ecosystem. Israel has long had a steady flow of young entrepreneurs creating companies and that is unlikely to disappear. Now it is seeing an increase in the number of seasoned entrepreneurs going back for second or third startups, with the experience under their belts of selling an earlier effort and working for a number of years at a Cisco or Juniper.

The ecosystem also is old enough that established companies, such as Check Point Software or Amdocs, have generated homegrown managers with backgrounds running substantial enterprises.

“When I look at the combination of all the layers of the cake, it makes for a healthy ecosystem,” said Scott Tobin, a general partner at Battery. “I think there is maturation in the market.”

The new trend also appears to be a deliberate effort to challenge the traditional model of Israeli venture capital: fund a young company, develop a product prototype, expand revenue to $3 million to $5 million and sell out while still relatively small. Frequently, U.S. investors have brought management and sales teams to the U.S. to better interact with the key U.S. market.

“I think the U.S. investors want to change that,” said Idan Netser, a partner at DLA Piper. “The Israeli mentality is: let’s grow a company to $100 million, sell it and do it again. I think it’s not a good thing, but that’s what we see.”

As a result, growth investing has gone from virtually non-existent five years ago to the largest segment of the venture market, and the bulk of the capital comes from U.S. investors.

“There has certainly been a change in mindset among both entrepreneurs and local investors, who take their cue from their American cousins,” Fisher said.

Helping give rise to this, Israeli startups are more independent than they have been in the past and better able to deliver a full product or service to customers, Fisher said.

Historically they found a niche and relied on strategic channels and OEMs to reach customers. This helped ensure an M&A outcome. Now they better try to control their destiny by using sales reps, inside sales and online sales.

At the same time, valuations also have crept up at the early stage, so there are fewer potential acquirers of younger companies. Founders are forced to raise growth capital as they think about possible IPOs and revenue run rates above $100 million.

Bessemer’s investing reflects the trend. Fisher said the firm invested in eight Israeli companies over the past 24 months, a number consistent with the past. “But we are putting more dollars in aggregate to work as our portfolio matures,” he said.

Yet “unless investors see big exits in the next 18 months, it could slow down as investor disappointment and frustration sets in,” he warned.

The change in the investment culture, “does take time to prove itself out,” agreed Tobin. “But from our ears on the ground, it does seem to be true.”

Despite this, skepticism remains. One reason is a skills gap. Israel has talent for technology and product development, but not for marketing and distribution, said Adam Benayoun, a venture partner at 500 Startups. This may change as more entrepreneurs move to the valley and learn about marketing and distribution, but “we still have a lot of work to do to build that middle management,” Benayoun said.

Another challenge is an emerging Series B crunch that could slow the development of later-stage companies. In 2016, the number of Series B rounds dropped 30 percent, according to IVC and ZAG.

“Investors are more cautious and it’s more rare to see ‘momentum’ types of investments,” said David Gussarsky, a partner at Lightspeed. “Entrepreneurs are now required to show more significant business milestones, such as revenues, gross margins and profitability, or a path to profitability.”

Gussarsky said he hasn’t seen a noticeable uptick in the activity of U.S. investors in the past year.

“I think that the higher foreign money inflows can be mainly attributed to Asian and European investors,” he said.

Lightspeed itself invested with the same cadence in 2016, adding three new early-stage investments and one new growth investment.

From an innovation perspective, Israel has always played an important role, added Steven Yang, an executive director at Adveq.

But it still doesn’t rank among what Yang identifies as the top 10 global innovation hubs based on the number of companies created and initially financed, a list that includes Silicon Valley, Boston, New York, London, Paris, Berlin, Tokyo and Beijing.

“Israel will play a role in global innovation,” he said. “The question is to what scale.” At present, there is no tangible evidence we should increase the firm’s exposure through funds or directly, he added.

Whether this sentiment shifts in the next year or so will be a trend worth watching. 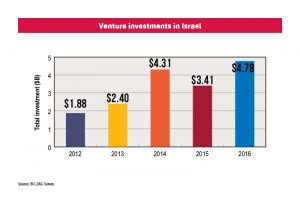 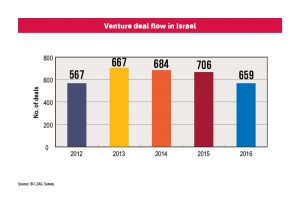 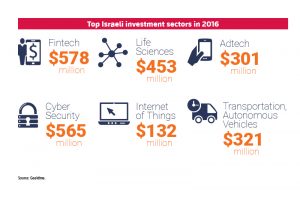