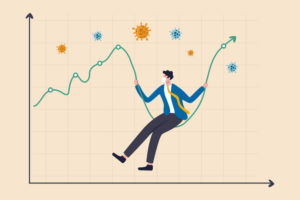 When the stock market took a nosedive during the early days of the coronavirus outbreak, GPs and LPs anticipated significant markdowns of their venture capital portfolios.

Since valuation adjustments to private companies lag public markets by a quarter or two, many investors were expecting to take big hits to their VC assets later in the year.

“I fear that eventual markdowns will be 20 to 30 percent,” an LP of a public pension fund told Venture Capital Journal in late April. “I am concerned that some companies don’t have liquidity and we will see some zeroes in Q3.”

Several months later, LPs are finding themselves pleasantly surprised with the performance of their venture capital investments.

At this point, it appears that just a few VC-backed companies will go out of business as a result of the coronavirus-fueled downturn, and valuations through Q2 are expected to either stay relatively flat or even increase, especially for late-stage focused managers.

The public pension LP said that the fears of large-scale markdowns did not materialize. While he expected valuations to sink 10 to 15 percent in the first quarter, the LP’s venture funds were marked down only 3 to 4 percent as of March 31.

And the little ground that was lost in Q1 was fully recovered and even advanced in the second quarter. “For the managers that already reported their performance, we are seeing around an 11 percent uptick for Q2,” the LP said.

Adams Street Partners is another LP that anticipates a sizable uptick in VC valuations.

The private markets firm, which backs emerging managers and has a long-standing partnership with such venture firms as Accel, Andreessen Horowitz and Benchmark, saw its venture funds decrease by 10 to 15 percent on average in Q1 relative to year-end 2019.

“But as the public markets have surged back, so have the comparable companies and the corresponding valuations for later-stage private companies,” Brijesh Jeevarathnam, partner and co-head of global venture fund investments, said via email. He expects valuation marks to tick back up by 10 to 20 percent for Q2.

In sync with public market

Valuations of late-stage companies are strongly tied to the performance of public equities, which ended Q1 in the bear market territory. But over the course of Q2, the stock market, as measured by S&P 500, recovered by more than 20 percent.

Public tech companies, which VC-backed start-ups use as comparables for valuation purposes, fared particularly well during the recovery. Investors rotated out of interest rate-tied asset classes that fell amid the US Fed rate cuts, into growth stocks, such as the so-called FAANG companies, DataDog and Crowdstrike, said Jules Maltz, a general partner with late-stage-focused IVP.

Private company marks are also dependent on the financial performance and future expectations of each portfolio company. Since many tech-related sectors, such as telemedicine, online education, e-commerce, and tools for working remotely benefited from covid-19 shutdowns, many VC-backed start-ups saw a pickup in business activity and anticipated a longer-term increase in customer demand.

“Q2 was the best quarter in our firm’s 30-year history. Every single company in our portfolio beat its revised plan. Some companies even had 70 percent month-over-month growth,” Maltz said.

But Maltz admits that IVP’s exceptional performance in the second quarter is in part a bounce back from large markdowns the firm took in Q1. “Late-stage market is more volatile because it is tied to public markets,” he said.

Since valuations of early-stage companies are generally not determined based on public stocks, Q2 performance of early-stage firms was “more of a mixed bag,” the public pension LP said.

Michael Kim, founder of Cendana Capital, a seed-stage fund of funds, said that most of the firm’s managers did not adjust valuations in Q1 and funds were marked down on average only 0.5 percent at the end of the second quarter.

How early-stage funds fared depended on the composition of portfolios, Kim said. “About two-thirds of our managers are focused on enterprise software and that segment hardly saw an impact,” he said.

But Kim expressed concern about future renewal rates of software companies catering to small and medium businesses (SMBs). “If SMBs, such as restaurants, go out of business, it will be an issue for SaaS companies selling into this vertical,” he said.

Laura Thompson, a principal with Sapphire Partners, an LP division within Sapphire Ventures, does not believe that early-stage funds are generally worse off than the late-stage focused firms.

“I don’t think more developed companies are necessarily doing better, but later-stage companies that are performing well will get much, much larger rounds at premium valuations,” she said. “If you look at marks, more value may be showing up in late-stage companies.”

While Thompson is optimistic about the VC asset class’ future performance, she said that markdowns and down rounds tend to happen more slowly. “My guess is that in Q2, write-ups will more than offset any decreases for companies that are still being impacted or having trouble raising,” she said.

Some managers are more eager to increase valuations of strong performers than to downtick companies in troubled sectors, such as travel and events.

Maggie Vo, general partner and chief investment officer with early-stage focused Fuel Venture Capital, said she reassessed the firm’s entire portfolio at the end of Q2. She gave three companies that are accelerating in the new economic environment an uptick, but the firm did not markdown any investments that are impacted by the pandemic.

Companies that Fuel Venture Capital marked up include Cookunity, a meal subscription service. Vo said that the outlook for the start-up has improved because consumer preferences have likely changed for the long-term.

But Vo decided not to change the value of impacted companies, such as Unitea, a music festival-events start-up. “We all agree that covid-19 is temporary,” she said about the firm’s hope that Unitea’s business will recover once the virus subsides and social events are again allowed.

“We are giving a few more quarters to see what transpires with the impacted companies,” she said.

While VC-backed companies performed much better-than-expected, Thompson underscored the importance of public markets. “If the stock market had truly crashed and stayed down, I believe the overall mindset would have been more pessimistic and liquidity would also have been very challenged,” she said.