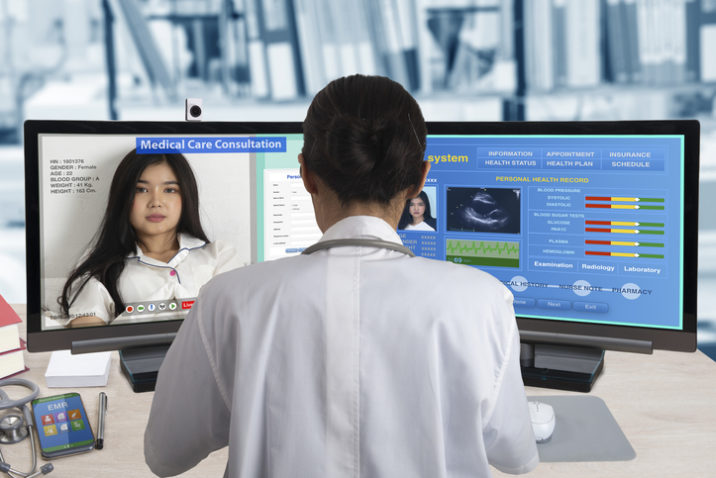 As the number of covid-19 cases climbs, seeing a doctor in a clinic or a hospital has never been riskier.

Since late February, the Center for Disease Control and the World Health Organization have urged health professionals to avoid seeing patients in-person and instead use telemedicine for all non-essential medical needs.

The concept of telemedicine, treating patients remotely via a video chat, has been around for almost two decades. Over those years, a slew of virtual care companies, including Teledoc, American Well, Doctor on Demand, MD Live and 98point6, has emerged, each trying to convince patients to use its offerings for the treatment of such common ailments as flu, allergies and back pain.

While convenient, wide-spread adoption of virtual health had been slow. But this changed drastically amid the covid-19 outbreak, creating an opportunity for patients and providers to experience these services.

Investors believe that physicians and patients like the convenience of telemedicine and they will continue to use it after the virus disappears.

Prior to the coronavirus pandemic, the bulk of virtual health services was used by patients living in rural areas without easy access to healthcare, while most everyone else preferred to go to an urgent care clinic for immediate medical needs. Less than 10 percent of healthcare consumers used some form of telemedicine, according to a 2019 J.D. Power study.

Most traditional telemedicine companies like the publicly traded Teledoc make money by partnering with insurance providers and employers, which in turn offer virtual care services to employees as a part of a healthcare benefits package. These companies rely on physicians who may be employed by other health systems but have extra capacity to work as a contractor for their virtual health network.

Until the end of February, reimbursements for telemedicine services varied by state and payer, but were typically substantially lower than for in-person appointments. Virtual health unit economics were not only less favorable for doctors, but also for patients who generally paid $49 for an online visit, which normally exceeded their insurance co-payments for primary care office visits.

In the wake of the pandemic, the US Government removed many regulations for telemedicine services, allowing doctors to bill Medicare at the same rate as for face-to-face appointments. While commercial insurers have not yet adopted the so-called “parity” reimbursements on a nationwide basis, they generally follow Medicare’s lead when it comes to this type of regulation, explained Ambar Bhattacharyya, managing director at Maverick Ventures.

He thinks that it will be difficult to roll back the reimbursement parity after the pandemic fades.

People who are introduced to telemedicine during the pandemic are generally liking the convenience. Bhattacharyya said that his mom recently met with her specialist doctors via Zoom. And now she “never wants to go back to the doctor’s office.”

The benefits of telemedicine are plentiful. No need to drive, look for parking and doctors show up to the appointment exactly at the agreed time.

“Prior to covid-19, video chats had to be done on a HIPPA compliant video platform, but now physicians are even allowed to use FaceTime on their smartphones,” Bhattacharyya said. We are currently in a wartime-like situation and the privacy obligations waver will probably not survive after coronavirus peters out, Bhattacharyya explained.

From a technology perspective, some of the current video platforms for telemedicine are similar, Bhattacharyya said. He said eVisit is one such example. The Arizona company, which is not a portfolio company of Maverick, provides a telemedicine patient engagement platform. Zoom is also HIPPA compliant and could be easily adapted for a virtual health appointment.

Cheryl Cheng, a general partner at BlueRun Ventures, said that she does not see a compelling investment thesis around enabling technologies because they eventually will be commoditized. She believes the biggest value in telemedicine will be from offerings that can treat chronic medical conditions.

Mental health services is one such area that could grow substantially. Some of the companies in teletherapy include Talkspace, which received more than $106 million in funding since its founding in 2012 and B2B and B2C offerings from Teledoc, among others.

Additionally, Cheng envisions future telemedicine opportunities in certain specialty areas, such as obstetrics, ophthalmology and dermatology. She added that diagnosis will eventually be expedited and treatment prioritized with the help of advances in AI diagnostic tools.

Bhattacharyya said that the telemedicine market right now is very disjointed. “We have leaders in dermatology, men’s health, women’s health. I hope that the end-game is a tightly integrated one-stop-shop super app.”

Just like Cheng, Nof believes that telemedicine offerings that treat chronic conditions will be the biggest winners in telemedicine. Tusk Ventures identified mental health and drug addiction service companies, such as Boulder Care, a digital platform for treating opioid addiction through virtual appointments and medication delivery, as areas of future growth.

But for Nof, the main game-changer for the industry is the reduction in regulation.

“Once people have experienced the convenience of telemedicine, why would they go back?” Cheng said.“Telemedicine was long in the making and covid-19 just catapults it forward.”