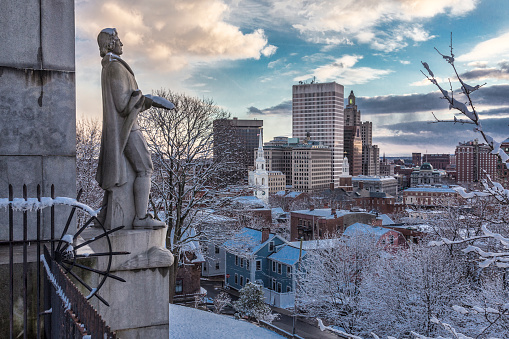 Thanks to new commitments from Rhode Island’s public employee pension fund, The Column Group (TCG) is close to reaching its fundraising target of $600 million apiece for its early-stage life science Fund V and later-stage Opportunity Fund III. Both are on track to close in June.

The Employees’ Retirement System of Rhode Island (ERSRI) recently committed $12.5 million to each of the funds, citing first-quartile performance across all metrics achieved by three of four funds in TCG’s flagship early-stage strategy and strong performance in its younger Opportunity Fund strategy. ERSRI previously committed $25 million to the TCG Crossover (TCGX) Fund I raised in 2021.

Investors in The Column Group’s previous funds have been rewarded handsomely. “TCG’s four previous early-stage funds and two later stage funds have generated a net IRR of 27.8 percent since 2007 [as of the end of last year],” according to a recommendation memo by Cliffwater, an adviser to ERSRI. “Investing in the Russell 2000 Growth Index1 during the same period would have generated a return of 15.1 percent.”

TCG V will focus on early-stage life sciences deals, investing in 10 to 12 portfolio companies, each needing $40 million to $80 million in capital, with the goal of generating a gross return of six to 10 times invested capital, according to the adviser.

TCG Opportunity III is focused on expansion and late-stage venture capital investments in life science companies previously backed by TCG. The new fund expects to invest in 15 to 20 companies, with equity investments of $20 million to $50 million per company, with hopes of a gross return of three to six times invested capital, Cliffwater said.

Based in San Francisco, TCG focuses on building biotech companies internally from scratch on the basis of promising front-line scientific research. In contrast, many other life science venture funds invest in companies trying to incrementally improve existing therapies.

Cliffwater’s recommendation memo said TCG’s approach to deal sourcing is different from that of other life science VC firms, centering on targeted, rigorous analysis of promising scientific areas and using its partners’ personal networks, and those of their science partners, to identify investable research, compounds and teams within those areas. TCG is looking for ideas and companies that can potentially transform end-markets and become platforms for developing strong pipelines of potential therapies, the memo said.

With a more concentrated portfolio compared to many venture strategies, TCG’s early-stage strategy consists of companies that demand time-intensive hands-on attention but that are expected to be able to return the entire fund’s committed capital, with potential to offset losses, TCG has said.

M&A investments in pharmaceuticals and life sciences are expected to reach $350 billion to $400 billion in 2022, according to a PwC outlook. Last year, the total value of M&A deals in the sector jumped 46 percent from 2020 to $269.4 billion, with deal volume up 52 percent to 370 transactions.

Among the more profitable of TCG’s M&A exits in recent years are acquisitions of Flexus Biosciences by BMS for $1.25 billion in 2015, Seragon Pharmaceuticals by Genentech for about $750 million in 2014 and Exonics Therapeutics by Vertex for up to $1 billion in 2019. These deals generated multiples of 24 times, 21 times and 12 times, respectively, TCG reported in a presentation to ERSRI.

The Rhode Island Treasurer’s Office expressed approval that The Column Group owns either 100 percent or a majority stake in its portfolio companies at inception and only adds more capital when scientific milestones have been reached. That lowers capital risk at early stages while still giving TCG a path to large ownership in breakout companies. By funding companies internally from scratch based on fresh ideas, TCG also avoids paying high valuations in later-stage syndicated funding rounds, the staff memo said.

The new commitments to The Column Group would bring ERSRI’s total exposure to venture capital to 13.3 percent as of April 30, based on fair market value and uncalled capital. The pension fund’s target allocation for private equity is 12.5 percent, but stood at 14.7 percent as of April 30.