About two-thirds of institutional limited partners are looking to increase their allocations to private markets over the next five years, according to PitchBook’s survey of 101 institutional LPs. 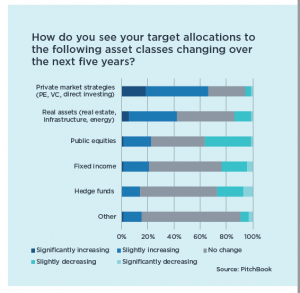 Although private markets grew substantially over the last decade, most institutions still have a small portion of their portfolios in private market strategies. As an example, the median allocation to private equity and venture capital for U.S.-based public pension plans is currently only 6.7 percent, according to PitchBook.

The report does not specify the breakdown between venture capital and private equity for a typical public pension plan, but it notes that during the last decade, the overall split between VC and PE has been constant, with venture receiving 20 percent and PE 80 percent of all AUMs in the private markets category.

PitchBook argues that private markets are becoming more appealing in part because PE and VC ecosystems have grown in terms of size and impact. Over the last decade, $3 trillion has flowed into private equity and venture capital, according to the report.

More importantly, top-performing VC and PE funds are outperforming the public markets, the report says. As the below graph illustrates, top-quartile venture and private equity managers have returned about 5x or more what the S&P 500 did over the past decade.

As a part of the survey, institutional LPs provided several reasons why private markets have been attracting significant capital amounts. Among those reasons are higher potential returns than in the public markets, diversification benefits and an increasing number of attractive PE and VC investment opportunities.

Based on their finding, PitchBook argues that despite what happens in the macro-economy, private markets will continue to play a large role in global capital markets over the next decade.