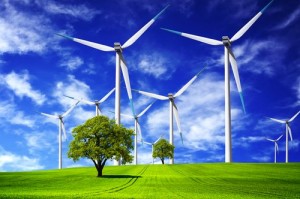 United Wind Inc, which has carved out a niche leasing wind turbines to farms and rural homes, has clinched US$200 million in funding from Toronto-based Forum Equity Partners, the largest-ever single investment in small wind projects.

The funding is a vote of confidence not only in the Brooklyn, New York-based startup, but in the nascent market for wind energy that is both produced and used on site.

Distributed generation, or power that is produced where it is consumed, has taken off in recent years as governments have pushed for more renewable sources of energy and have sought to scale back on fossil fuels like coal and natural gas that are traditionally used in utility-owned power plants.

Small wind turbines work best on large properties, generally an acre or more, where wind is abundant. The turbines are far smaller than the massive ones seen in a typical industrial wind farms. United Wind customers include farms, industrial facilities and rural homes.

The US$200 million will fund about 1,000 projects in the Northeast and Midwest, United Wind told Reuters, allowing the privately-held company to expand significantly beyond the 26 projects it developed since 2013.

Forum includes rooftop solar in its portfolio of investments and sees United Wind as a “first mover” in a market with major opportunity for growth, Chief Executive Richard Abboud said.

“The capital is coming in,” United Wind CEO Russell Tencer said in an interview. “We expect to see that same hockey stick (growth) curve that we’ve seen in the solar industry.”

The Distributed Wind Energy Association, an industry trade group, expects distributed wind capacity to reach 30 gigawatts by 2030, up from 1 GW in 2015.

“To have a leasing model like what United Wind is coming up with is huge,” said Jennifer Jenkins, executive director of the DWEA. “You see where solar is now and they are there because of this model.”

Much like popular solar lease programs that have underpinned the rapid growth of companies like SolarCity Corp and Sunrun Inc, United Wind’s lease program allows farmers or other rural property owners, with no upfront cost, to power their homes or businesses with small wind turbines, producing between 50 and 100 percent of their electricity needs while lowering their overall energy costs.

United Wind’s primary source of revenue comes from monthly payments by its customers. Distributed wind is able to use federal tax credits and state incentives that make it cost-competitive with power from the grid.

The small and medium-sized turbines United Wind uses for its leases would start around US$80,000 to buy outright, Tencer added.

“I saw an opening in the market where all the ingredients to make distributed wind work were there,” Tencer said. “But no company had pulled all that together into a package.”

(This story has been edited by Kirk Falconer, editor of PE Hub Canada)